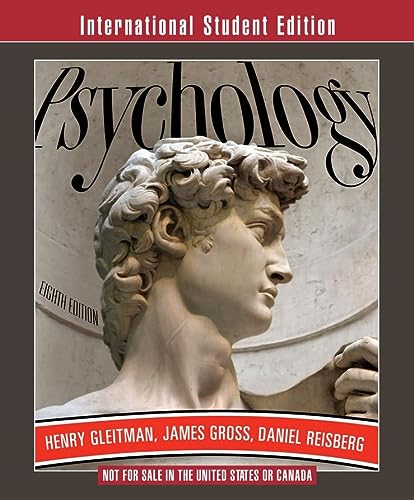 The most intelligent book ever written for the course, reinvented for today's students.

The Eighth Edition has been reorganized and streamlined to mirror the organization of today's courses, updated to include extensive coverage of the latest discoveries and research, and reimagined with new pedagogy, figures, and technology.

James Gross, co-author of the text and Director of the Psychology One Teaching Program at Stanford University, believes in an integrated approach that looks at multiple perspectives to understand the larger complexities of the field. In the Eighth Edition, the authors present psychology as a central discipline that connects to the humanities as well as the exciting advances in neuroscience.

Book Description W. W. Norton & Company, 2010. Condition: Good. This is an ex-library book and may have the usual library/used-book markings inside.This book has soft covers. In good all round condition. Please note the Image in this listing is a stock photo and may not match the covers of the actual item,1750grams, ISBN:9780393116823. Seller Inventory # 6243805

Book Description W. W. Norton & Co., 2010. Paperback. Condition: Good. Good condition is defined as: a copy that has been read but remains in clean condition. All of the pages are intact and the cover is intact and the spine may show signs of wear. The book may have minor markings which are not specifically mentioned. Most items will be dispatched the same or the next working day. Seller Inventory # wbb0013455418

Book Description W. W. Norton & Company, 2011. Condition: Poor. This is an ex-library book and may have the usual library/used-book markings inside.This book has soft covers. In poor condition, suitable as a reading copy. Seller Inventory # 8450180

Book Description W. W. Norton & Company, 2010. Condition: Good. A+ Customer service! Satisfaction Guaranteed! Book is in Used-Good condition. Pages and cover are clean and intact. Used items may not include supplementary materials such as CDs or access codes. May show signs of minor shelf wear and contain limited notes and highlighting. Seller Inventory # 0393116824-2-4

Book Description -. Paperback. Condition: Very Good. Psychology This book is in very good condition and will be shipped within 24 hours of ordering. The cover may have some limited signs of wear but the pages are clean, intact and the spine remains undamaged. This book has clearly been well maintained and looked after thus far. Money back guarantee if you are not satisfied. See all our books here, order more than 1 book and get discounted shipping. Seller Inventory # 7719-9780393116823

Book Description Paperback. Condition: Good. The book has been read but remains in clean condition. All pages are intact and the cover is intact. Some minor wear to the spine. Seller Inventory # GOR004717466

Book Description Paperback. Condition: Very Good. The book has been read, but is in excellent condition. Pages are intact and not marred by notes or highlighting. The spine remains undamaged. Seller Inventory # GOR006022166