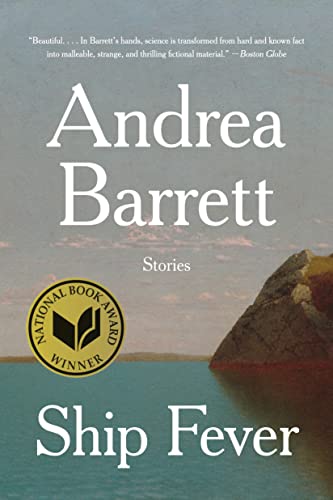 The elegant short fictions gathered hereabout the love of science and the science of love are often set against the backdrop of the nineteenth century. Interweaving historical and fictional characters, they encompass both past and present as they negotiate the complex territory of ambition, failure, achievement, and shattered dreams. In "Ship Fever," the title novella, a young Canadian doctor finds himself at the center of one of history's most tragic epidemics. In "The English Pupil," Linnaeus, in old age, watches as the world he organized within his head slowly drifts beyond his reach. And in "The Littoral Zone," two marine biologists wonder whether their life-altering affair finally was worth it. In the tradition of Alice Munro and William Trevor, these exquisitely rendered fictions encompass whole lives in a brief space. As they move between interior and exterior journeys, "science is transformed from hard and known fact into malleable, strange and thrilling fictional material" (Boston Globe).

In 1764, two Englishwomen set out to prove that swallows--contrary to the great Linnaeus's belief--do not hibernate underwater. But they must be patient and experiment in secret, such actions being inappropriate for the female of the species. In 1862, a hopeless naturalist heads off for yet another journey, though he can't seem to rid his conscience of the thousands of animals that have already died in his service. In 1971, a pregnant young woman, ill at ease with her socially superior husband and his stepchildren, hears of a Tierra del Fuegan taken hostage by the commander of the Beagle in 1835. This unwilling specimen was, we read, "captured, exiled, re-educated; then returned, abused by his family, finally re-accepted. Was he happy? Or was he saying that as a way to spite his captors? Darwin never knew."

Many of the characters who populate Andrea Barrett's National Book Award-winning collection, Ship Fever, feel similarly displaced in the world. They long to prove themselves in both science and love, but are often thwarted by gender, social position, or the prevailing order. In "The Behavior of the Hawkweeds," the wife of a genetics professor has learned that each narrative of discovery is matched by one, if not more, "in which science is not just unappreciated, but bent by loneliness and longing." Barrett's astonishing tales of ambition and isolation convey the meaning and feeling behind the patterns--scientific and emotional--but slip free of easy closure. The two women in "Rare Bird," like the swallows, depart England for more conducive climes, or so the brother of one believes. The reader is left to hope, and imagine. Much has been made of Andrea Barrett's interlacing of history, knowledge, and fact--and rightly so. But equal attention should be paid to the brilliant serenity and exactitude of her style. --Kerry Fried

After writing four novels in quick succession, I felt a longing to try something new - new voices, new approaches, new lengths and shapes," Barrett says about the writing of her book. "Ship Fever grew from that longing, with the collection as a whole evolving from the stories themselves, rather than from any preconceived notion. Although the stories differ from much of my earlier work because of their focus on history, writing them felt like a natural extension - I've always relied on research to uncover other people's lives and help me invent interesting situations. I knew as little, initially, about the Chinese doctors in The Middle Kingdom, or the elderly monk in The Forms of Water, as I did about these biologists.

My background is a little unusual for a writer; as a young woman, very much influenced by growing up on Cape Cod and by my love of the ocean and the natural world, I decided to be a biologist. I majored in biology in college, but not until a very brief stay in a graduate zoology program did I understand that I wasn't cut out to be a scientist. What I'd really wanted to be was a version of Darwin or Wallace; I wanted to see and describe and appreciate and name, not to analyze. Slowly I learned that those were the traits of a naturalist - a 19th-century profession. After I abandoned science, a brief but intense bout of studying history weaned me from the academic life for good; once more it was the stories of the field that captured me. I'm a slow learner, but at that point I finally turned to writing fiction. Still, science, particularly the history of science, never lost its fascination for me. I'm married to a scientist; many of my friends are scientists; for a while I edited medical and nursing books. And as I started writing these new stories I found myself driven back to the people and situations that had captivated me as a young woman.

What was it like to be Linnaeus, naming plants and animals for the first time? Or Mendel, ignored and despised? Those scientists I'd once glimpsed briefly at a marine-biology station - what might go on in their interior lives? What about the women I knew who had gone on to be successful scientists? If I'd been a doctor with a scientific mind in the 1840s, and was confronted with an epidemic disease caused by unknown factors, what would I have done?

Writing these tales, I felt as though I'd finally found a way to bring together science, history, and fiction - the three great, seemingly disparate, loves of my life. As if the long route I'd traveled in my writing, swinging wide through explorations of family life and contemporary love, China and a village lost to water, had led me back home after all.