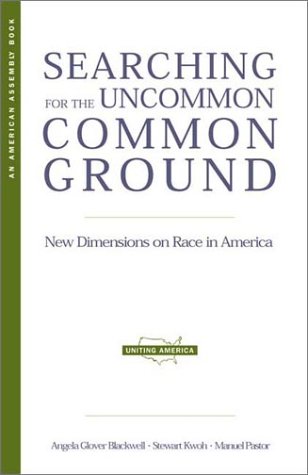 A wide-ranging and in-depth discussion of the persistently divisive issues surrounding race in this country.

Race is easily the defining point of American disunity. Often discussed in black and white, today's racial divide includes growing numbers of Hispanics and Asian Americans, as well as Native Americans. By broadening the parameters of the racial dialogue, this book brings a new perspective to an essential American issue. The American Assembly of Columbia University commissioned this volume as part of its Uniting America series.
Charts, tables, graphs

Angela Glover Blackwell is is the founder and CEO of PolicyLink, a national research and action institute advancing economic and social equity, with offices in Oakland, California, and New York, New York.

Stewart Kwoh is the founding president and executive director of the Asian Pacific American Legal Center in Los Angeles.

Manuel Pastor is a professor of American Studies & Ethnicity and the director of the Program for Environmental and Regional Equity (PERE) at the University of Southern California.

SEARCHING FOR THE UNCOMMON COMMO

SEARCHING FOR THE UNCOMMON COMMO