Abrams, M. H. The Norton Anthology of English Literature, Volume A: The Middle Ages through the Restoration and the Eighteenth Century 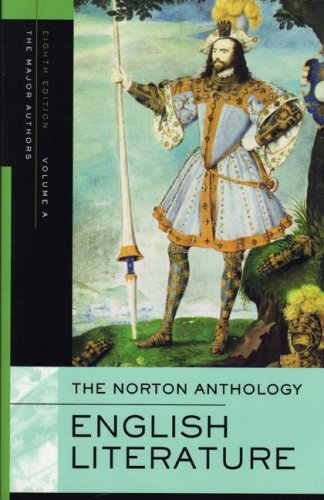 Firmly grounded by the hallmark strengths of all Norton Anthologies―thorough and helpful introductory matter, judicious annotation, complete texts wherever possible―The Norton Anthology of English Literature, The Major Authors has been revitalized in this Eighth Edition through the collaboration between six new editors and six seasoned ones. Under the direction of Stephen Greenblatt, General Editor, the editors have reconsidered all aspects of the anthology to make it an even better teaching tool.

Alfred David (Ph.D. Harvard) is Professor of English Emeritus at Indiana University. He is the author of The Strumpet Muse: Art and Morals in Chaucer’s Poetry, and editor of the "Romaunt of the Rose" in The Riverside Chaucer and, with George B. Pace, "Chaucer’s Minor Poems I" in The Variorum Chaucer. He is the recipient of a Sheldon Travelling Fellowship and Guggenheim and Fulbright Research fellowships and past president of the New Chaucer Society.

Barbara K. Lewalski (Ph.D. Chicago) is William R. Kenan Professor of English and of History and Literature at Harvard University. She is the recipient of the MLA’s James Russell Lowell Prize for Protestant Poetics and the Seventeenth-Century Religious Lyric and the Explicator Prize for Donne’s Anniversaries and the Poetry of Praise. Her other books include Paradise Lost and the Rhetoric of Literary Forms, Writing Women in Jacobean England, Milton: A Critical Biography, and The Polemics and Poems of Rachel Speght (editor). Lewalski is the recipient of Guggenheim and NEH Senior fellowships and is a fellow of the American Academy of Arts and Sciences and Honored Scholar of the Milton Society.

Lawrence Lipking (Ph.D. Cornell) is Professor of English and Chester D. Tripp Professor of Humanities at Northwestern University. He received the Phi Beta Kappa Christian Gauss Prize for The Life of the Poet. He is also the author of The Ordering of the Arts in Eighteenth-Century England; Abandoned Women and Poetic Tradition; and Samuel Johnson: The Life of an Author and editor of High Romantic Argument. Lipking is the recipient of Guggenheim, ACLS, Newberry Library, Wilson International Center for Scholars, and NEH Senior fellowships and is a fellow of the American Academy of Arts and Sciences.

George M. Logan (Ph.D. Harvard) is a Senior Fellow of Massey College in the University of Toronto and the James Cappon Professor of English Emeritus at Queen’s University, Canada, where he was head of the English Department for nine years and an award-winning teacher. He is the author of The Meaning of More’s Utopia and principal editor of the Cambridge edition of Utopia (Latin and English), editor of the Norton Critical Edition of Utopia (3rd edition), More’s History of King Richard the Third, and The Cambridge Companion to Thomas More, and coeditor, with Gordon Teskey, of Unfolded Tales: Essays on Renaissance Romance; he has also written a history of the Indiana University School of Music.

Katharine Eisaman Maus (Ph.D. Johns Hopkins) is James Branch Cabell Professor of English at the University of Virginia. She is the author of Being and Having in Shakespeare; Inwardness and Theater in the English Renaissance; and Ben Jonson and the Roman Frame of Mind; editor of a volume of Renaissance tragedies; and coeditor of English Renaissance Drama: A Norton Anthology, The Norton Anthology of English Literature, and a collection of criticism on seventeenth-century English poetry. She has been awarded Guggenheim, Leverhulme, NEH, and ACLS fellowships, and the Roland Bainton Prize for Inwardness and Theater.

James Noggle (Ph.D. UC Berkeley) is Professor of English at Wellesley College. He is author of The Skeptical Sublime: Aesthetic Ideology in Pope and the Tory Satirists; his second book, The Temporality of Taste in Eighteenth-Century British Writing, is forthcoming from Oxford. He is the recipient of fellowships from the American Council of Learned Societies and the American Philosophical Society.

James Simpson (Ph.D. Cambridge) is Douglas P. and Katherine B. Loker Professor of English at Harvard University and former Chair of Medieval and Renaissance English at the University of Cambridge. An Honorary Fellow of the Australian Academy of the Humanities, he is the author of Piers Plowman: An Introduction to the B-Text (1990); Sciences and the Self in Medieval Poetry (1995); Reform and Cultural Revolution, 1350–1547; Volume 2 of The Oxford English Literary History (2002); Burning to Read: English Fundamentalism and Its Reformation Opponents (2007); and Under the Hammer: Iconoclasm in the Anglo-American Tradition (2010).