Items related to Worlds Together, Worlds Apart: A History of the World...

Worlds Together, Worlds Apart: A History of the World from the Beginnings of Humankind to the Present (Second Edition) (Vol. C: 1750 to Present) 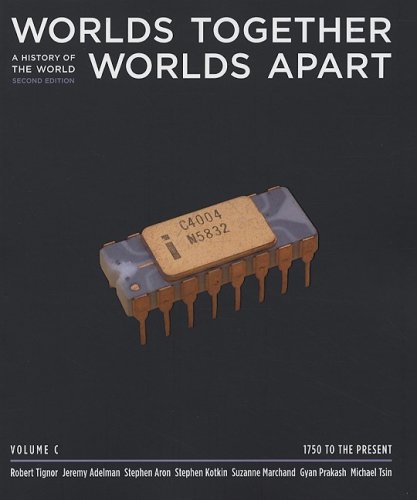 True to its title, this uniquely integrated text highlights the stories and themes in world history that tied cultures and regions together, and in some cases, drove them apart.

In this second edition, the book's non-Eurocentric approach continues with expansions of the original eleven world history "turning point" stories from the modern period to include ten more "turning point" stories from the earlier periods of world history. From the history of the world's first cities built on the great rivers of Afro-Eurasia, to the formation of the Silk Road, to the rise of nation-states, and the story of modern globalization, Worlds Together, Worlds Apart provides students with the stories that changed history and enables them to make the connections they need in order to better understand how the world came to be what it is today.

Robert Tignor (Princeton University) is Professor Emeritus and the Rosengarten Professor of Modern and Contemporary History at Princeton University and the former three-time chair of the history department. With Gyan Prakash, he introduced Princeton’s first course in world history nearly twenty years ago. Professor Tignor has taught graduate and undergraduate courses in African history and world history and written extensively on the history of twentieth century Egypt, Nigeria, and Kenya. Besides his many research trips to Africa, Professor Tignor has taught at the University of Ibadan in Nigeria and the University of Nairobi in Kenya.

Jeremy Adelman (D. Phil. Oxford University) is currently the chair of the history department at Princeton University and the Walter S. Carpenter III Professor of Spanish Civilization and Culture at Princeton University. He has written and edited five books, including Republic of Capital: Buenos Aires and the Legal Transformation of the Atlantic World (1999), which won the best book prize in Atlantic history from the American Historical Association. Professor Adelman is the recent recipient of a Guggenheim Memorial Foundation Fellowship and the Frederick Burkhardt Award from the American Council of Learned Societies.

Stephen Aron (Ph.D. University of California, Berkeley) is Professor of history at the University of California, Los Angeles and Executive Director, Institute for the Study of the American West, Autry National Center. A specialist in frontier and western American history, Aron is the author of How the West Was Lost: The Transformation of Kentucky from Daniel Boone to Henry Clay and American Confluence: The Missouri Frontier from Borderland to Border State. He has also published articles in a variety of books and journals, including the American Historical Review, the Pacific Historical Review, and the Western Historical Quarterly.

Stephen Kotkin (Ph.D. University of California, Berkeley) is Professor of History and teaches European and Asian history at Princeton University, where he also serves as director of Russian Studies. He is the author of Armageddon Averted: The Soviet Collapse, 1970–2000 (2001) and Magnetic Mountain: Stalinism as a Civilization (1995) and is a coeditor of Mongolia in the Twentieth Century: Landlocked Cosmopolitan (1999). His upcoming book is entitled Impaled Horses: Labyrinths of the Ob River Basin, which is a study of the Ob River valley over the last seven centuries. Future works include a biography of Joseph Stalin entitled Stalin’s World. Professor Kotkin has also served twice as a visiting professor in Japan.

Suzanne Marchand (Ph.D. University of Chicago) is associate professor of European and intellectual history at Louisiana State University, Baton Rouge. Professor Marchand also spent a number of years teaching at Princeton University. She is the author of Down from Olympus: Archaeology and Philhellenism in Germany, 1750–1970 (1996) and is currently writing a book on German “orientalism.”

Gyan Prakash (Ph.D. University of Pennsylvania) is professor of modern Indian history at Princeton University and a member of the Subaltern Studies Editorial Collective. He is the author of Bonded Histories: Genealogies of Labor Servitude in Colonial India (1990), Another Reason: Science and the Imagination of Modern India (1999) and Mumbai Fables (2010). Professor Prakash edited After Colonialism: Imperial Histories and Postcolonial Displacements (1995) and Noir Urbanisms (2010), codited The Space of the Modern City (2008) and Utopia/Dystopia (2010), and has written a number of articles on colonialism and history writing. He is currently working on a history of the city of Bombay. With Robert Tignor, he introduced the modern world history course at Princeton University.

Michael Tsin (Ph.D. Princeton) is associate professor of history and international studies at the University of North Carolina at Chapel Hill. He previously taught at the University of Illinois at Chicago, Princeton University, Columbia University, and the University of Florida. Professor Tsin's primary interests include the histories of modern China and colonialism, and he is the author of Nation, Governance, and Modernity in China: Canton, 1900-1927 (paperback ed., 2003). His current research explores the politics of cultural translation with regard to the refashioning of social and institutional practices in China since the mid-nineteenth century.