Items related to The Norton Anthology of Theory & Criticism 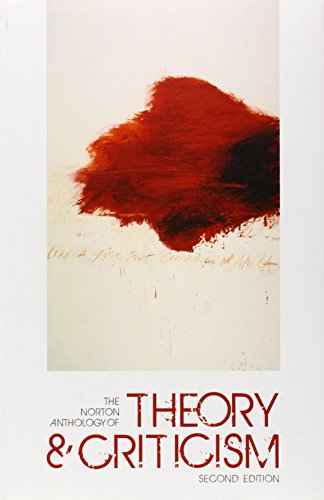 The most comprehensive anthology of theory and criticism, now up-to-date and global.

The Norton Anthology of Theory and Criticism is the gold standard for anyone who wishes to understand the development and current state of literary theory. Offering 185 pieces (31 of them new) by 148 authors (18 of them new), The Norton Anthology of Theory and Criticism, Second Edition, is more comprehensive, and more varied, in its selection than any other anthology. New selections from non-western theory and a thoroughly updated twentieth century selection make the book even more diverse and authoritative.

Vincent B. Leitch is a George Lynn Cross Research Professor at the University of Oklahoma where he holds the Paul and Carol Daube Sutton Chair in English. A foremost historian of contemporary literary criticism and theory, he is the author of the standard history, American Literary Criticism from the 1930s to the 1980s as well as Deconstructive Criticism and Cultural Criticism, Literary Theory, Poststructuralism (all three books published by Columbia UP), Postmodernism: Local Effects, Global Flows (SUNY Press), Theory Matters (Routledge), Living with Theory (Blackwell), and American Literary Criticism since the 1930s, 2nd edition (Routledge).

William E. Cain is the Mary Jewett Gaiser Professor of English at Wellesley College. A scholar of American literature and American literary criticism, Professor Cain is the author of The Crisis in Criticism: Theory, Literature, and Reform in English Studies (Johns Hopkins UP), F. O. Matthiessen and the Politics of Criticism (U of Wisconsin Press), and Literary Criticism, 1900-1950: The Cambridge History of American Literature (Cambridge UP) as well as the editor or co-editor of several college textbooks, including An Introduction to Literature (Longman), American Literature (Penguin), The Little, Brown Reader (Longman), and Literature for Composition (Longman).

Laurie A. Finke is Director of the Women’s and Gender Studies program at Kenyon College. A prominent medievalist and feminist critic, Professor Finke is the author of Cinematic Illuminations: The Middle Ages on Film (Johns Hopkins UP), King Arthur and the Myth of History (University Press of Florida), Feminist Theory, Women’s Writing (Cornell UP) and Women’s Writing in English: The Middle Ages (Longman) and the editor of Medieval Texts and Contemporary Readers (Cornell UP).

Barbara E. Johnson was the Frederic Wertham Professor of Law and Psychiatry in Society at Harvard University. She was a leading figure in contemporary literary theory and the author of The Critical Difference: Essays in Contemporary Rhetoric of Reading (Johns Hopkins UP), A World of Difference (Johns Hopkins UP), The Wake of Deconstruction (Blackwell), The Feminist Difference: Literature, Psychology, Race and Gender (Harvard UP), Mother Tongues: Sexuality, Trials, Motherhood, Translation (Harvard UP), and Persons and Things (Harvard UP). She was also the translator of Jacques Derrida’s Dissemination (U of Chicago P) and Stéphane Mallarmé’s Divagations (Harvard UP/Belknap Press).

John McGowan is the Ruel W. Tyson, Jr. Distinguished Professor of the Humanities and Director of the Institute for the Arts and Humanities at the University of North Carolina, Chapel Hill. A leading critic of postmodernism and social theories relating to literature, he is the author of Postmodernism and its Critics (Cornell UP), Hannah Arendt: A Critical Introduction (U of Minnesota P), Democracy’s Children: Intellectuals and the Rise of Cultural Politics (Cornell UP), and American Liberalism: An Interpretation for Our Time (UNC Press), and editor (with Craig Calhoun) of Hannah Arendt and the Meaning of Politics (U of Minnesota P).

T. Denean Sharpley-Whiting is Professor of French, Professor and Director of African American and Diaspora Studies, and Director of the W. T. Bandy Center for Baudelaire and Modern French Studies at Vanderbilt University. A leading scholar in Black European Studies and comparative Black Diaspora literatures and cultures and theories of race and feminism, she is the author of Pimps Up, Ho's Down: Hip Hop's Hold on Young Black Women (NYU Press), Negritude Women (U of Minnesota Press), Black Venus: Sexualized Savages, Primal Fears, and Primitive Narratives in French (Duke UP), and Frantz Fanon: Conflicts and Feminisms (Rowman & Littlefield), and she has edited or co-edited five books, including The Speech: Race and Barack Obama's "A More Perfect Union" (Bloomsbury).

Jeffrey J. Williams is Professor of English and of Literary and Cultural Studies at Carnegie Mellon University. He is the author of Theory and the Novel: Narrative Reflexivity in the English Tradition (Cambridge UP) and the editor of PC Wars: Politics and Theory in the Academy (Routledge), The Institution of Literature (SUNY Press), and Critics at Work: Interviews (NYU Press). He has also published journalism in venues such as The Village Voice, Dissent, and The Chronicle of Higher Education. Since 1992, he has been the editor of the literary and critical journal, the minnesota review.