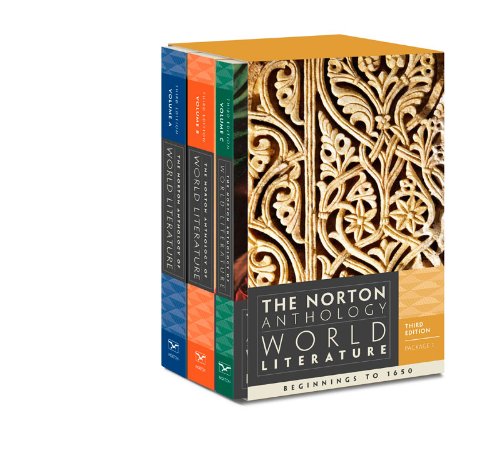 Read by millions of students since its first publication, The Norton Anthology of World Literature remains the most-trusted anthology of world literature available. Guided by the advice of more than 500 teachers of world literature and a panel of regional specialists, the editors of the Third Edition―a completely new team of scholar-teachers―have made this respected text brand-new in all the best ways. Dozens of new selections and translations, all-new introductions and headnotes, hundreds of new illustrations, redesigned maps and timelines, and a wealth of media resources all add up to the most exciting, accessible, and teachable version of “the Norton” ever published.

The Norton Anthology of World Literature is now available as an interactive ebook, at just a fraction of the print price.

Martin Puchner is the Byron and Anita Wien Professor of Drama and of English and Comparative Literature at Harvard University. He is the author of The Drama of Ideas: Platonic Provocations in Theater and Philosophy (2010), Poetry of the Revolution: Marx, Manifestos, and the Avant-Gardes (2006), and Stage Fright: Modernism, Anti-Theatricality, and Drama (2002). His edited books and introductions include Six Plays by Henrik Ibsen (2003), Lionel Abel's Tragedy and Metatheatre (2003), The Communist Manifesto and Other Writings (2005), and Modern Drama: Critical Concepts (2007). He is also co-editor of Against Theatre: Creative Destructions on the Modernist Stage (2006), The Norton Anthology of World Literature, Third Edition (2012), and The Norton Anthology of Western Literature, Ninth Edition (2014).

Suzanne Conklin Akbari is Professor of English and Medieval Studies at the University of Toronto. Her books include Seeing Through the Veil: Optical Theory and Medieval Allegory (2004) and Idols in the East: European Representations of Islam and the Orient, 1100–1450 (2009). Among her edited volumes are Marco Polo and the Encounter of East and West (2008), co-edited with Amilcare Iannucci, and the Oxford Handbook to Chaucer (2013).

Wiebke Denecke is Associate Professor of Chinese, Japanese, and Comparative Literature at Boston University. She is the author of two books, The Dynamics of Masters Literature: Early Chinese Thought from Confucius to Han Feizi (2010) and Classical World Literatures: Sino-Japanese and Greco-Roman Comparisons (forthcoming).

Vinay Dharwadker (University of Wisconsin-Madison) is the author of Cosmopolitan Geographies: New Locations in Literature and Culture (2001) and a book of poetry, Sunday at the Lodi Gardens: Poems (1994). He is the editor of The Oxford Anthology of Modern Indian Poetry (1994) and The Collected Essays of A. K. Ramanujan (1999), and the translator of a collection of Kabir’s work called Kabir: The Weaver’s Songs (2003).

Barbara Fuchs is Professor of Spanish and English at UCLA, where she also directs the Center for Seventeenth- and Eighteenth-Century Studies and the William A. Clark Memorial Library. She is the author of Mimesis and Empire: The New World, Islam, and the Construction of European Identities (2001), Passing for Spain: Cervantes and the Fictions of Identity (2003), Romance (2004), and Exotic Nation: Maurophilia and the Construction of Early Modern Spain (2009). She is also a co-editor, with Aaron Ilika, of two captivity plays by Miguel de Cervantes: The Bagnios of Algiers and The Great Sultana (2009).

Caroline Levine is David and Kathleen Ryan Professor of the Humanities and Professor of English at Cornell University. She has written three books: The Serious Pleasures of Suspense: Victorian Realism and Narrative Doubt (2003), Provoking Democracy: Why We Need the Arts (2007), and Forms: Whole, Rhythm, Hierarchy, Network (2015).

Pericles Lewis is the Douglas Tracy Smith Professor of Comparative Literature at Yale University, where he also serves as Vice President for Global Strategy. He is the author of three books―Modernism, Nationalism, and the Novel (2000), The Cambridge Introduction to Modernism (2007), and Religious Experience and the Modernist Novel (2010)―and editor of The Cambridge Companion to European Modernism (2011). He was formerly Founding President and Professor of Humanities at Yale-NUS College in Singapore.