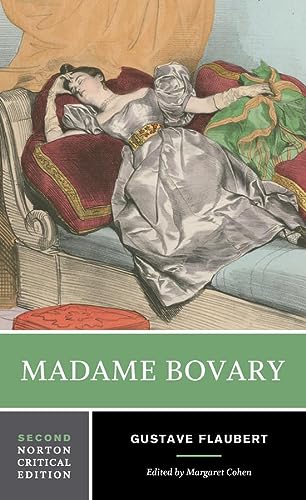 The text of this Norton Critical Edition is based on Eleanor Marx Aveling’s celebrated translation, revised by Paul de Man.

Margaret Cohen’s careful editorial revision modernizes and renews Flaubert’s stylistic masterpiece. In addition, Cohen has added to the Second Edition a new introduction, substantially new annotations, and twenty-one striking images, including photographs and engravings, that inform students’ understanding of middle-class life in nineteenth-century provincial France. In Madame Bovary, Flaubert created a cogent counter discourse that exposed and resisted the dominant intellectual and social ideologies of his age. The novel’s subversion of conventional moral norms inevitably created controversy and eventually led to Flaubert’s prosecution by the French government on charges of offending "public and religious morality." This Norton edition is the only one available that includes the complete manuscript from Flaubert’s 1857 trial. "Criticism" includes sixteen studies regarding the novel’s central themes, twelve of them new to the Second Edition, including essays by Charles Baudelaire, Henry James, Roland Barthes, Jonathan Culler, and Naomi Schor. A Chronology and Selected Bibliography are also included.

This exquisite novel tells the story of one of the most compelling heroines in modern literature--Emma Bovary. Unhappily married to a devoted, clumsy provincial doctor, Emma revolts against the ordinariness of her life by pursuing voluptuous dreams of ecstasy and love. But her sensuous and sentimental desires lead her only to suffering corruption and downfall. A brilliant psychological portrait, Madame Bovary searingly depicts the human mind in search of transcendence. Who is Madame Bovary? Flaubert's answer to this question was superb: "Madame Bovary, c'est moi." Acclaimed as a masterpiece upon its publication in 1857, the work catapulted Flaubert to the ranks of the world's greatest novelists. This volume, with its fine translation by Lowell Bair, a perceptive introduction by Leo Bersani, and a complete supplement of essays and critical comments, is the indispensable Madame Bovary.

o peer into the heart of an adulteress and enumerate its contents with profound dispassion, the author of Madame Bovary was tried for "offenses against morality and religion." What shocks us today about Flaubert's devastatingly realized tale of a young woman destroyed by the reckless pursuit of her romantic dreams is its pure artistry: the poise of its narrative structure, the opulence of its prose (marvelously captured in the English translation of Francis Steegmuller), and its creation of a world whose minor figures are as vital as its doomed heroine. In reading Madame Bovary, one experiences a work that remains genuinely revolutionary almost a century and a half after its creation.