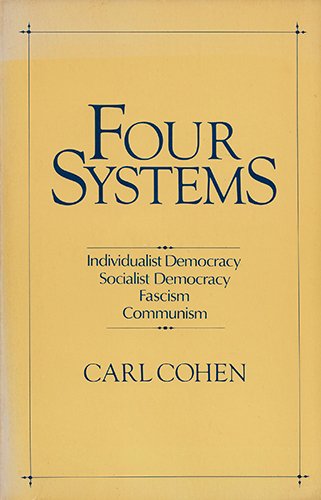 Four systems -- politico-philosophical systems -- compete for our allegiance: -- Socialist Democracy -- Individualist Democracy -- Fascism -- Communism In this book a persuasive case is made in defense of each of these four systems in turn. The most effective presentation of any argument will always be made by one who is himself convinced of its validity, one who is confident that the world-view he puts forward gives the truest and deepest account of human life and government. This understanding -- that every system best speaks for itself -- is the fundament of this book. The account of each philosophical system is here presented in the persuasive voice of its ardent advocate. These are modern arguments formulated in contemporary language; each is presented by a knowledgeable thinker from within the system he defends, applied to human circumstances as actually experienced today. Socialist Democracy is the first system defended. Its realization of the will of the people, and its protection of the interests of all citizens is recounted. Parks and industries, health care and national infrastructure (it is argued) can be given the development and care they deserve only when the people address their common needs as a community, conscious of their social unity. Individualist democracy is next defended, its advocate pointing to the fundamental place of the particular human beings of whom society consists. The equal rights of individuals, the freedom of persons to live their own lives in their own way without the interference of governments, are defended as the theoretical core of democracy. Fascism, the third system, begins with the understanding that the equality democrats claim to prize is a myth. The real social world is a great natural hierarchy, an organic whole, a transcendent system of classes and authorities within which each human life can achieve its full significance. Communism, the fourth system, approaches society as a system in progress, a dynamic and developing system, rather than a static, pre-existing whole. It gives full recognition to process and to growth, to the history of human communities, the dialectical conflict of classes within them, and the eventual commanding place of laboring men and women.