Items related to The Centaur 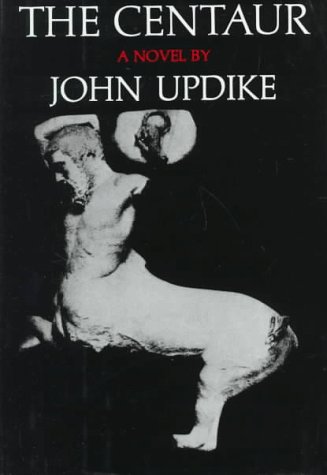 "A triumph of love and art." THE WASHINGTON POST

In a small Pennsylvania town in the late 1940s, schoolteacher George Caldwell yearns to find some meaning in his life. Alone with his teenage son for three days in a blizzard, Caldwell sees his son grow and change as he himself begins to lose touch with his life. Interwoven with the myth of Chiron, the noblest centaur, and his relationship to the Titan Prometheus, "The Centaur" is one of Updike's most brilliant novels.
From the Paperback edition.

"A Triumph Of Love And Art."

"A brilliant achievement...No one should need to be told that Updike has a mastery of the language matched in our time only by the finest poets."

"A brilliant and moving novel."

"A classic...A beautiful and memorable book."

John Updike was born in 1932 in Shillington, Pennsylvania. He is the author of over fifty books, including The Poorhouse Fair; the Rabbit series (Rabbit, Run; Rabbit Redux; Rabbit Is Rich; Rabbit At Rest); Marry Me; The Witches of Eastwick, which was made into a major feature film; Memories of the Ford Administration; Brazil; In the Beauty of the Lilies; Toward the End of Time; Gertrude and Claudius; and Seek My Face. He has written a number of collections of short stories, including The Afterlife and Other Stories and Licks of Love, which includes a final Rabbit story, Rabbit Remembered. His essays and criticism first appeared in publications such as the New Yorker and the New York Review of Books, and are now collected into numerous volumes. Collected Poems 1953-1993 brings together almost all of his verse, and a new edition of his Selected Poems is forthcoming from Hamish Hamilton.His novels, stories, and non-fiction collections have won have won the Pulitzer Prize, the National Book Award, the PEN/Faulkner Award, the American Book Award, the National Book Critics Circle Award, the Rosenthal Award and the Howells Medal. Updike graduated from Harvard College in 1954, and spent a year at Oxford's Ruskin School of Drawing and Fine Art. From 1955 to 1957 he was a member of staff at the New Yorker, and he lived in Massachusetts from 1957 until his death in January 2009.