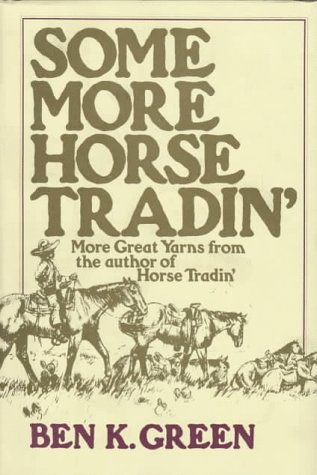 From the same corral that produced the widely loved Horse Tradin', Ben K. Green has rounded up fifteen new yarns filled with the ornery yet irresistible style that has earned his books a place in classic Western Americana.

Some More Horse Tradin' recounts the dealings of a whole slew of craggy old-timers and rangy characters. See them match wits as they trade well-bred mares, snorty-like range colts, and used-to-be-bad horses from the tumbleweed plains. Admire the old-time knavery, skill, and salesmanship in such tales as "Gittin' Even", "Brethren Horse Traders", "Mule Schoolin'", and "Water Treatment and the Sore-Tailed Bronc". Ride along with Green, and he'll tell you what he knows about horseflesh, but keep your wits about you, and hang on to your wallet.

Ben K. Green was a veterinarian who practiced his profession in one of the last big horse countries in North America. When he gave up his practice, he returned to his hometown of Cumby, Texas, where he raised horses and cattle until his death in 1974.