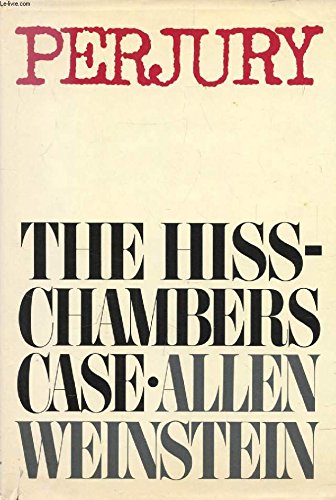 On August 3, 1948, Time magazine editor Whittaker Chambers made a stunning allegation before the House Un-American Activities Committee: Alger Hiss, president of the Carnegie Endowment for International Peace and former high-ranking State Department official, had served with him in the Communist underground. Hiss's defense was the most gripping story of its day, and the question of his guilt has remained an American enigma. Now, historian Allen Weinstein finally solves, once and for all, one of the great American mysteries. Weinstein also, for the first time ever, draws upon previously inaccessible information from Soviet archives. The result is an extraordinary book that leaves anyone who reads it with one inescapable conclusion: Alger Hiss was guilty.

In this updated version of the landmark book on one of the truest contenders for the title of "trial of the century," historian Allen Weinstein shows beyond all reasonable doubt that Alger Hiss was a Soviet spy. The book is meticulously detailed and sharply persuasive. Its cast of intriguing characters include Hiss, who maintained his innocence until his death in 1996, and his accuser Whittaker Chambers, a pair who became respective icons for left- and right-wing politics in America during the Cold War years. J. Edgar Hoover and a young Richard Nixon also play key roles. The best quality of Perjury, however, is the uncommon clarity of Weinstein's prose. The very first paragraph neatly sums up the controversial case:

Once upon a time, when the Cold War was young, a senior editor of Time accused the president of the Carnegie Foundation of having been a Soviet agent. The Time editor made his charge stick, aided by an obscure young Congressman from the House Committee on Un-American Activities, a tough federal prosecutor, and the director the FBI. As a result, the Endowment president spent forty-four months in jail and became a cause celebre; the magazine editor resigned and died a decade later, still obsessed with the case; the prosecutor became a federal judge; the director of the FBI lived to guard the republic against real or imagined enemies for another twenty-five years; and the young Congressman left obscurity behind to become the thirty-seventh President of the United States.

--John J. Miller About the Author:

Allen Weinstein is the president and CEO of the Center for Democracy.  A historian by training (with professorships at Smith, Georgetown, and Boston University), he is based in Washington, D.C.