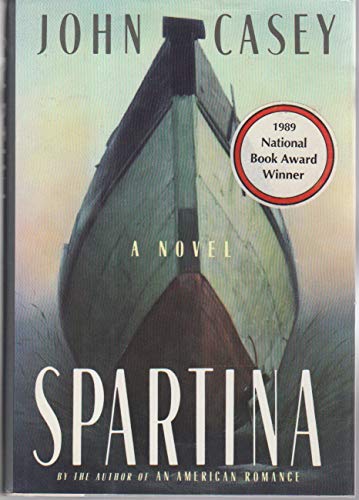 Winner of the 1989 National Book Award

A classic tale of a man, a boat, and a storm, Spartina is the lyrical and compassionate
story of Dick Pierce, a commercial fisherman along the shores of Rhode Island's
Narragansett Bay. A kind, sensitive, family man, he is also prone to irascible outbursts
against the people he must work for, now that he can no longer make his living from the
sea.

Pierce's one great passion, a fifty-foot fishing boat called Spartina, lies unfinished in
his back yard.  Determined to get the funds he needs to buy her engine, he finds himself
taking a foolish, dangerous risk.  But his real test comes when he must weather a storm at
sea in order to keep his dream alive.  Moving and poetic, Spartina is a masterly story of
one man's ongoing struggle to find his place in the world.
From the Trade Paperback edition.

Dick Pierce, fisherman and boat-builder, lives on the Rhode Island shore in a backwater world of salt marshes, alcoholic fishermen, crab boats and old homesteads disappearing under new resorts for inland tourists. A stubborn man thoughtful enough to know that the world is becoming too small for men like himself, Pierce has a mortgage, a family, a "puny income from lobstering" and a dream: to finish the half-built boat in his backyard so he can fish for red crabs out in deep water, make some real money and raise himself and his family up. He is a classic American solitary hero, and Casey knows the sloughs of the Rhode Island shore as well as any fisherman. Spartina won the National Book Award in 1989.

"Possibly the best American novel since The Old Man and the Sea, maybe even Moby Dick." --The New York Times Book Review

Shipping: US$ 60.98
From United Kingdom to U.S.A.
Destination, rates & speeds