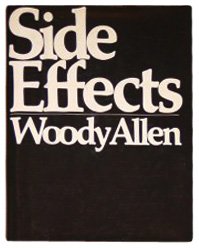 Woody Allen's third collection of comic writings. 149p. These essays appeared in The New Yorker during the late 1970s. Volume includes Remembering Needleman, The Kugelmass Episode, Confessions of a Buglar, and more.

Though not as explosively, mind-alteringly funny as his earlier books, Side Effects is still loaded with chuckles; the much-anthologized "Kugelmass Episode" is worth the price of the book. For fans of his films--or for anyone who wants a final glimpse of Woody in his first, best role as court jester, Side Effects is a must-have. --Michael Gerber From the Inside Flap: