Items related to The Optimist's Daughter 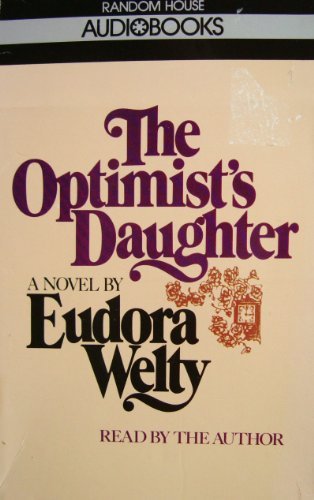 This story of a young woman's confrontation with death and her past is a poetic study of human relations.
From the Trade Paperback edition.

The Optimist's Daughter is a compact and inward-looking little novel, a Pulitzer Prize winner that's slight of page yet big of heart. The optimist in question is 71-year-old Judge McKelva, who has come to a New Orleans hospital from Mount Salus, Mississippi, complaining of a "disturbance" in his vision. To his daughter, Laurel, it's as rare for him to admit "self-concern" as it is for him to be sick, and she immediately flies down from Chicago to be by his side. The subsequent operation on the judge's eye goes well, but the recovery does not. He lies still with both eyes heavily bandaged, growing ever more passive until finally--with some help from the shockingly vulgar Fay, his wife of two years--he simply dies. Together Fay and Laurel travel to Mount Salus to bury him, and the novel begins the inward spiral that leads Laurel to the moment when "all she had found had found her," when the "deepest spring in her heart had uncovered itself" and begins to flow again.

Not much actually happens in the rest of the book--Fay's low-rent relatives arrive for the funeral, a bird flies down the chimney and is trapped in the hall--and yet Welty manages to compress the richness of an entire life within its pages. This is a world, after all, in which a set of complex relationships can be conveyed by the phrase "I know his whole family" or by the criticism "When he brought her here to your house, she had very little idea of how to separate an egg." Does such a place exist anymore? It is vanishing even from this novel, and the personification of its vanishing is none other than Fay--petulant, graceless, childish, with neither the passion nor the imagination to love. Welty expends a lot of vindictive energy on Fay and her kin, who must be the most small-minded, mean-mouthed clan since the Snopeses hit Frenchman's Bend. There's more than just class snobbery at work here (though that surely comes into it too). As Welty sees it, they are a special historical tribe who exult in grieving because they have come to be good at it, and who seethe with resentment from the day they are born. They have come "out of all times of trouble, past or future--the great, interrelated family of those who never know the meaning of what has happened to them."

Fay belongs to the future, as she makes clear; it's Laurel who belongs to the past--Welty's own chosen territory. In her fine memoir, One Writer's Beginnings, Welty described the way art could shine a light back "as when your train makes a curve, showing that there has been a mountain of meaning rising behind you on the way you've come." Here, in one of her most autobiographical works, the past joins seamlessly with the present in a masterful evocation of grief, memory, loss, and love. Beautifully written, moving but never mawkish, The Optimist's Daughter is Eudora Welty's greatest achievement--which is high praise indeed. --Mary Park

Eudora Welty was born in Jackson, Mis-sissippi, in 1909. She was educated locally and at Mississippi State College for Women, the University of Wisconsin, and the Columbia University Graduate School of Business. Her short stories appeared in The Southern Review, Atlantic Monthly, Harper’s Bazaar, The New Yorker, and other magazines. She lectured at a number of colleges, held the William Allan Neilson professorship at Smith and the Lucy Donnelly Fellowship at Bryn Mawr, and was a lecturer at the Conference of American Studies at Cambridge University. She worked under grants from the Rockefeller and Merrill foundations and the National Institute of Arts and Letters, and held a Guggenheim Fellow-ship. She was given honorary degrees from Smith, the University of Wisconsin, Western College for Women, Denison University, the University of the South at Sewanee, and Millsaps College in Jackson. She also received the M. Carey Thomas Award from Bryn Mawr, the Brandeis Medal of Achievement, and the Hollins Medal; her novel The Ponder Heart was awarded the Howells Medal for Fiction by the American Academy of Arts and Letters. Eudora Welty died in 2001.
From the Hardcover edition.