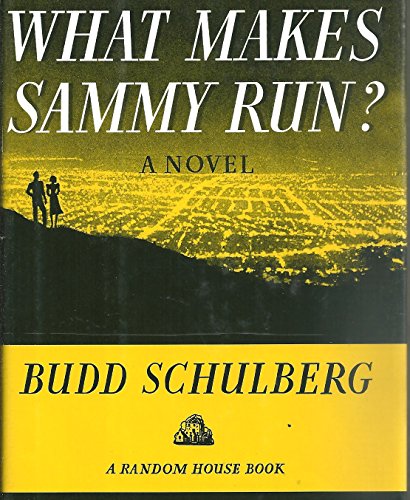 This is the question Schulberg has asked himself, and the answer is the first novel written with the indignation that only a young writer with talent and ideals could concentrate into a manuscript. It is the story of Sammy Glick, the man with a positive genius for being a heel, who runs through New York’s East Side, through newspaper ranks and finally through Hollywood, leaving in his wake the wrecked careers of his associates; for this is his tragedy and his chief characteristic—his congenital incapacity for friendship.

An older and more experienced novelist might have tempered his story and, in so doing, destroyed one of its outstanding qualities. Compromise would mar the portrait of Sammy Glick. Schulberg has etched it in pure vitriol, and dissected his victim with a precision that is almost frightening.

When a fragment of this book appeared as a short story in a national magazine, Schulberg was surprised at the number of letters he received from people convinced they knew Sammy Glick’s real name. But speculation as to his real identity would be utterly fruitless, for Sammy is a composite picture of a loud and spectacular minority bitterly resented by the many decent and sincere artists who are trying honestly to realize the measureless potentialities of motion pictures. To this group belongs Schulberg himself, who has not only worked as a screen writer since his graduation from Dartmouth College in 1936, but has spent his life, literally, in the heart of the motion-picture colony. In the course of finding out what makes Sammy run (an operation in which the reader is spared none of the grue-some details) Schulberg has poured out everything he has felt about that place. The result is a book which the publishers not only believe to be the most honest ever written about Hollywood, but a penetrating study of one kind of twentieth-century success that is peculiar to no single race of people or walk of life.

Budd Schulberg wrote On the Waterfront, made into a movie starring Marlon Brando, and The Harder They Fall, made into a movie starring Humphrey Bogart. He won an Oscar for the screenplay of On the Waterfront several awards for his film A Face in the Crowd, and a Tony nomination for his Broadway adaptation of The Disenchanted. He attributed his ability to adapt his own work to stage or screen to his upbringing in Hollywood, where his father ran a major motion-picture studio. He died in 2009 at the age of 95.