Items related to A Thousand Acres 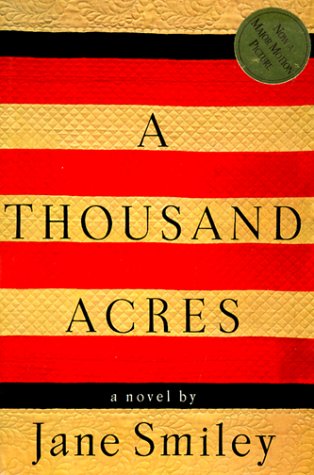 A thousand acres, a piece of land of almost mythic proportions. Upon this fertile, nourishing earth, Jane Smiley has set her rich, breathtakingly dramatic novel of an American family whose wealth cannot stay the hand of tragedy. It is the intense, compelling story of a father and his daughters, of sisters, of wives and husbands, and of the human cost of a lifetime spent trying to subdue the land and the passions it stirs. The most critically acclaimed novel of the literary season, a classic story of contemporary American life, A THOUSAND ACRES is destined to be read for years to come.
"It has been a long time since a novel so surprised me with its power to haunt . . . . Its genius grows from its ruthless acceptance of the divided nature of every character . . . . This gives A THOUSAND ACRES the prismatic quality of the greatest art." -- Chicago Tribune
Winner of the Pulitzer Prize and the National Book Critics Circle Award
From the Trade Paperback edition.

Aging Larry Cook announces his intention to turn over his 1,000-acre farm--one of the largest in Zebulon County, Iowa--to his three daughters, Caroline, Ginny and Rose. A man of harsh sensibilities, he carves Caroline out of the deal because she has the nerve to be less than enthusiastic about her father's generosity. While Larry Cook deteriorates into a pathetic drunk, his daughters are left to cope with the often grim realities of life on a family farm--from battering husbands to cutthroat lenders. In this winner of the 1991 National Book Critics Circle Award for Fiction, Smiley captures the essence of such a life with stark, painful detail.

“A family portrait that is also a near-epic investigation into the broad landscape, the thousand dark acres of the human heart. . . . The book has all the stark brutality of a Shakespearean tragedy.” —The Washington Post Book World

“Superb. . . . There seems to be nothing Smiley can’t write about fabulously well.” —San Francisco Chronicle

“It has been a long time since a novel so surprised me with its power to haunt. . . . A Thousand Acres [has] the prismatic quality of the greatest art.” —Chicago Tribune

“A full, commanding novel. . . . A story bound and tethered to a lonely road in the Midwest, but drawn from a universal source. . . . Profoundly American.” —The Boston Globe