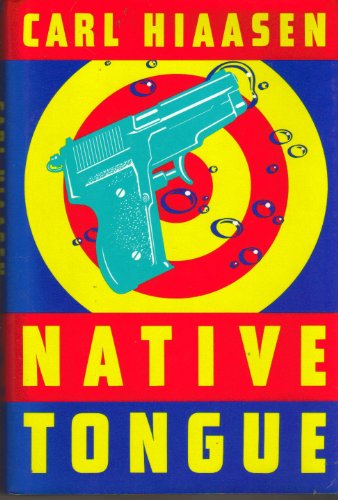 "Ruthlessly wicked...Wonderful...His best book yet."
ATLANTA JOURNAL & CONSTITUTION
When the precious clue-tongued mango voles at the Amazing Kingdom of Thrills on North Key Largo are stolen by heartless, ruthless thugs, Joe Winder wants to uncover why, and find the voles. Joe is lately a PR man for the Amazing Kingdom theme park, but now that the voles are gone, Winder is dragged along in their wake through a series of weird and lethal events that begin with the sleazy real-estate agent/villain Francis X. Kingsbury and can end only one way....
From the Paperback edition.

Carl Hiaasen (pronounced "hiya-sun") was born and raised in South Florida and presently lives in Tavernier, smack in the middle of the Florida Keys. He attended Emory University and was graduated with a degree in journalism from the University of Florida at Gainesville in 1974. Hiaasen began his journalism career writing weird public interest stories ("Garbageman for a day") at Cocoa Today (now the Melbourne-based Florida Today). He joined the Miami Herald in 1976, and since then has been a reporter for their general assignment desk, Sunday magazine and investigative team. As part of The Miami Herald's investigative team, Hiaasen has worked on projects exposing dangerous doctors in Florida, land corruption in the Florida Keys, and drug smuggling in the Bahamas and Key West. He is currently Metro columnist for the paper where his award-winning columns on rapacious development, egregious business practices, and corrupt politicians have helped clarify issues for the Florida citizenry. Carl Hiaasen turned his hand to fiction in the early eighties. His first novel, Tourist Season,was published in 1986 and named "one of the ten best destination reads of all time" by GQ Magazine. He is the author of five other best-selling novels, Double Whammy, Skin Tight, Native Tongue, Strip Tease and Stormy Weather. Louise Bernikow, writing in Cosmopolitan, calls Hiaasen's fiction "unbelievably funny -- tears-running-down-your-cheeks funny in spite of some pretty weighty themes like the destruction of the environment and the cut-throat ways of developers." Tony Hillerman calls Hiaasen "the Mark Twain of the crime novel." And Donald Westlake says "Hiaasen is so good he ought to be illegal." Hiaasen is also a songwriter, having co-wrote two songs on Warren Zevon's album. Mutineer (the two songs are Seminole Bingo and Rollweiler Blues). The film Strip Tease, based on Hiaasen's novel, directed by Andrew Bergman starring Demi Moore in pasties and Burt Reynolds in a hairpiece, was a recent major motion picture.

Hiaasen's fourth Florida crime-farce--about an environmental- protection scam--is as manic as ever but lacks the crisp suspense that made Skin Tight a minor crime-classic. As usual, Hiaasen plunks a male Alice (reporter-turned-flak Joe Winder) into a tropical Wonderland (the Disney-rival theme park of the Amazing Kingdom of Thrills); but, again, he pushes slapstick black humor at the expense of thrills. It's a typically bizarre Hiaasen opening as the vacationing Whelper family panics when someone tosses a rat into their convertible--and the rat turns out to be one of only two blue-tongued mango voles left on earth, stolen, on orders of an eco-terrorist geriatric, by two bungling burglars who then mistook the voles for rats and threw them away. That's the last we see of the Whelpers--and the voles--although the geriatric and the thieves figure in the labyrinthine un-cover-up that follows as Joe deduces that the mango voles are just plain voles disguised to shake endangered-species' funds out of Uncle Sam: another venal venture by Joe's boss, Kingdom-owner and land- developer Francis X. Kingsbury, who, it transpires, is a mobster on the lam from John Gotti. In between losing his girlfriend to her new calling as a phone-sex scriptwriter and romancing a new love, Joe deduces that Orky the whale's choking to death on biologist Will Koocher was no accident but murder: Koocher knew too much about the voles. That sets Joe up as the next victim of Kingsbury and his steroid-pumped goon (who chews off his foot at the ankle when trapped beneath a car), but with some help from a Florida- governor-turned-swamp-rat (recycled from Double Whammy), Joe takes down the Kingdom and saves a wilderness in the process. Madcap and sometimes quite funny, but strained as well, with the action often so absurd as to leach realism and thus suspense. The problem may be that Hiaasen's tilled this particular crime- comic soil one time too many. -- Copyright ©1991, Kirkus Associates, LP. All rights reserved.