Items related to Learned Hand : The Man and the Judge

Gerald Gunther Learned Hand : The Man and the Judge

Learned Hand : The Man and the Judge 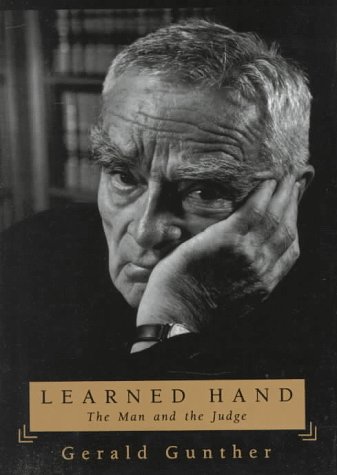 A Masterful, moving account of the life and work of one of the great judges of the twentieth century, whose work has left a profound mark on our legal, intellectual, and social landscape. The greatest judge never to be appointed to the Supreme Court, Learned Hand is widely considered the peer of Justices Holmes, Brandeis, and Cardozo. In his more than fifty years on the bench, he left an unequaled legacy of lastingly influential writings. This distinctive biography goes well beyond Hand's official work, however, to depict both a complex human being and the times in which he lived. The first to draw on the enormous collection of the judge's private papers, the eminent constitutional scholar Gerald Gunther vividly portrays a public man consumed by private doubts. Gunther's lively account moves from Hand's childhood in a formidable (and anxiety-producing) family of lawyers to his years at Harvard as a studious outsider, his frustrating experience in private law practice, his felt inadequacies in marriage, and his work as a federal judge. Throughout his life, Hand believed himself unworthy of the accolades bestowed upon him; self-doubt permeated all aspects of his life.

Gunther subtly explores the ties between the modest, uncertain man -- a liberal skeptic who was never "too sure [he was] right" -- and his public record, and suggests that Hand's personal traits shaped his modest approach to judging: the questioning human being could not help acting that way as a judge. Hand's most enduring legacy is his advocacy of judicial restraint: repeatedly he sounded the dangers of excessive activism in unelected judges. Yet he mustered the courage to support such basic values as freedom of expression -- from his personally costly defense of dissenters amid the hysteria of World War I to his strong affirmation of free speech in his rulings on obscenity and his outspoken attacks on McCarthyism in the 1950s.

This biography also offers the perspective of one of this era's most sensitive public figures on the rich political and social history of the first six decades of the twentieth century. By examining Hand's voluminous correspondence with such acquaintances as Walter Lippmann, Felix Frankfurter, and Herbert Croly (with whom he was a founding contributor to The New Republic), Gunther illuminates Hand's intense involvement with the public issues of his times, such as his enthusiastic support of Theodore Roosevelt's Progressive party. Gunther gives us a graphic portrait of a complex and uncommon man whose thoughts and words inspired generations of Americans and continue to do so today.

Gerald Gunther served as law clerk to Judge Learned Hand and later to Chief Justice Earl Warren in the 1950s, and then entered private legal practice in New York. Since 1962 he has been Professor of Constitutional Law at Stanford University Law School, where he is also William Nelson Cromwell Professor of Law.

An exhaustive and affectionate, albeit admittedly biased, account of the life and legal work of one of the nation's greatest jurists. As Gunther correctly points out, although biographies of Supreme Court justices abound, very little attention is paid to the judges of the country's lower courts. Only a handful of these men and women become widely known or achieve lasting fame. An exception is Billings Learned Hand (1872-1961), arguably the greatest United States judge never to sit on the highest court. Yet he had, as a judge on the Second Circuit Court of Appeals (covering New York), a far greater impact upon the law than many who served on the more august body. Using, for the first time, the voluminous private papers of Hand (at the request of the judge's son-in-law), Gunther, a noted constitutional scholar at Stanford University, delves deeply into the life of this remarkable individual. Born in Albany to a family that could trace its roots to the Mayflower, Hand attended Harvard College, then ``drifted'' into Harvard Law School (he originally wanted to be a philosopher). After graduating he practiced law in his home town but eventually gravitated to Wall Street. Appointed to the federal bench in 1909 as a district court judge, Hand would decide one of the most influential free speech cases ever, the Masses Publishing Co. v. Patten decision of 1917, in which he protected dissident speech. He became an appellate judge in 1924 (eventually becoming chief judge) and quickly achieved prominence in American legal thought. He retired in 1951, after fighting against Cold War hysteria and McCarthyism from the bench. Former Supreme Court Justice Lewis Powell provides a foreword. An important work on an important figure, despite its reflection of the built-in prejudice of the biographer, who served as Hand's law clerk. -- Copyright ©1994, Kirkus Associates, LP. All rights reserved.

1. Learned Hand : The Man and the Judge

2. Learned Hand : The Man and the Judge

3. Learned Hand : The Man and the Judge

4. Learned Hand : The Man and the Judge