Items related to America, a prophecy,: A new reading of American poetry...

Quasha, George America, a prophecy,: A new reading of American poetry from pre-Columbian times to the present

America, a prophecy,: A new reading of American poetry from pre-Columbian times to the present 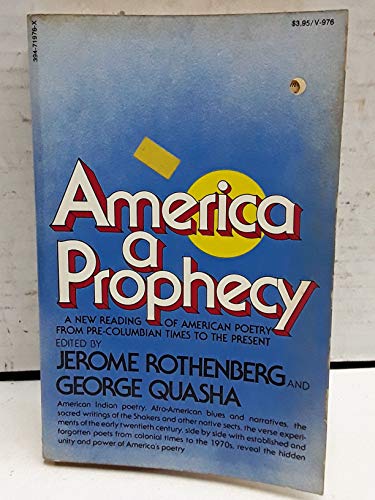 When Thoreau wrote in his Journal in 1841, Good poetry seems so simple and natural a thing that when we meet it we wonder that all men are not always poets, and when Whitman describes Leaves of Grass as a language experiment, they are expressing an approach to poetry that never ceased and has grown continuously during recent decades. This ground-breaking anthology of the early 1970s takes such an approach in presenting the poetry of the North American continent. It includes many recognized poets of the period, though appearing here in often unexpected contexts, and others who have been overlooked but whose contributions to the development of poetry are revolutionary. Starting from their own moment, the editors have read back into the more distant past and selected from broad American traditions works that had thitherto been considered outside the realm of poetry proper: the native poetry of the American continent, African-American sermons, blues and gospels, and the sacred, often innovative poetry of such radical religious groups as the Shakers. The book takes its title from William Blake's poem presenting the American Revolution as not only a powerful, promising and problematic historical event but the birth of a new development in man's consciousness-one that finds complex expression in the poetry of a continent. Selections mostly appear non-chronologically in juxtapositions suggesting what T. S. Eliot called the simultaneous order of all poetries of all times.

George Quasha is the co-founder of Barrytown/Station Hill Press. He is a poet and artist who works across mediums to explore principles in common within language, sculpture, drawing, video, sound, installation, and performance. His awards include a National Endowment for the Arts Fellowship in poetry (1975), and a John Simon Guggenheim Foundation Fellowship in video art (2006).

1. America, a prophecy,: A new reading of American poetry from pre-Columbian times to the present Quasha, George

2. America, a prophecy,: A new reading of American poetry from pre-Columbian times to the present Quasha, George