Items related to The Americans 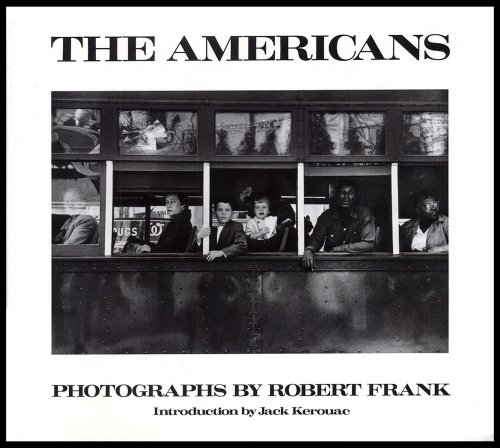 Previously published in 1959, Frank's most famous and influential photography book contained a series of deceptively simple photos that he took on a trip through America in 1955 and 1956. These pictures of everyday people still speak to us today, 40 years and several generations later.

Armed with a camera and a fresh cache of film and bankrolled by a Guggenheim Foundation grant, Robert Frank crisscrossed the United States during 1955 and 1956. The photographs he brought back form a portrait of the country at the time and hint at its future. He saw the hope of the future in the faces of a couple at city hall in Reno, Nevada, and the despair of the present in a grimy roofscape. He saw the roiling racial tension, glamour, and beauty, and, perhaps because Frank himself was on the road, he was particularly attuned to Americans' love for cars. Funeral-goers lean against a shiny sedan, lovers kiss on a beach blanket in front of their parked car, young boys perch in the back seat at a drive-in movie. A sports car under a drop cloth is framed by two California palm trees; on the next page, a blanket is draped over a car accident victim's body in Arizona.

Robert Frank's Americans reappear 40 years after they were initially published in this exquisite volume by Scalo. Each photograph (there are more than 80 of them) stands alone on a page, while the caption information is included at the back of the book, allowing viewers an unfettered look at the images. Jack Kerouac's original introduction, commissioned when the photographer showed the writer his work while sitting on a sidewalk one night outside of a party, provides the only accompanying text. Kerouac's words add narrative dimension to Frank's imagery while in turn the photographs themselves perfectly illustrate the writer's own work.

Select Praise for the 50th Anniversary Edition of Robert Frank, The Americans:

"Photography was never the same after The Americans. Diane Arbus, Lee Friedlander and Nan Goldin all walked through the door Frank opened. And his influence was by no means limited to art photography. Fashion ads, music videos, movies- everyone stole from Frank".
Malcolm Jones, Newsweek

"One of the greatest photography books of the 20th century."
Richard Lacayo, TIME

"Frank's genius was to see America unfiltered, much like Walker Evans and Dorthea Lange. There are no tricks here, no posing or false glory, just a sense of desolation."
David Ulin, Los Angeles Times

"The Americans reflects the mood of a turbulent decade, when postwar euphoria was giving way to racial tension and anti-Communist paranoia. But it's not just remarkable for its subject matter. The book offered a new visual language for photography: an intimate, off kilter aesthetic that's been imitated so many times that it seems obvious. In 1958, in an era of Tupperware and Hula-Hoops, it was far from obvious. Like its contemporary Beat-era poetry and novels, The Americans was a blast of authenticity, a potent artistic statement, a revelation."
Sarah Coleman, Planet

"To mark the book's fiftieth anniversary, Steidl has published a new edition, complete with Kerouac's introduction, making The Americans the most famous photography book all over again."
Nicole Rudick, Bookforum