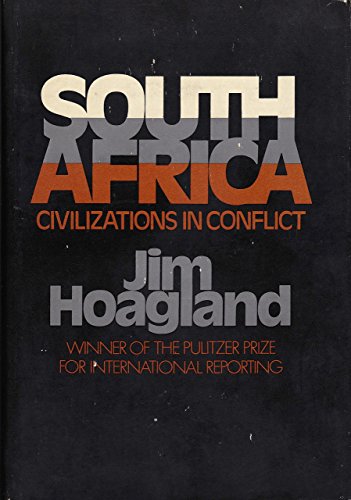 The Republic of South Africa is at once a spectacular failure and a booming success. It is a rich country, with vast natural resources and a subservient laboring class. It is a country of many races and nations; the Afrikaners, whose ancestors emigrated from Holland in the 17th century; the English-speaking people, descendants of a once-ruling caste that has yielded its dominance by default; the coloreds, neither white nor black, treasuring their few pathetic privileges and belonging nowhere; the black majority, fearful and leaderless, forbidden to own land in the 87% of the country that constitutes the white man's area, with only the right to barter their services, and even that restricted. Jim Hoagland examined the various elements of this divided society in the articles he wrote for the Washington Post - a series for which he was awarded the 1971 Pulitzer Prize for international reporting. Now, in this book based on firsthand observation, he looks more deeply into the conflicts and accommodations of this strange country. Mr. Hoagland went to South Africa intending to investigate and report on the people of the country, its amazing economic performance, and its future role in Africa. He did not plan to write about apartheid; so much had been written already that there seemed little more to say. But, once there, he found it impossible to ignore, for it touches and influences every aspect of life - the people, whether black, white, or colored, and the way they live, the government, the church, business, and education. No corner of life is too private or remote to remain untouched, no person or institution too powerful or too trivial to feel its weight. Mr. Hoagland considers South Africa by itself and in its relation to the rest of the world. He defines the differences between it and other white supremacist states, such as Rhodesia and the multi-racial class-society of Portuguese Angola and Mozambique, and describes South Africa's relations with them and with the bl

Book Description Houghton Mifflin Harcourt Publishing Company. Hardcover. Condition: Good. A copy that has been read, but remains in clean condition. All pages are intact, and the cover is intact. The spine may show signs of wear. Pages can include limited notes and highlighting, and the copy can include previous owner inscriptions. At ThriftBooks, our motto is: Read More, Spend Less. Seller Inventory # G0395136466I3N00

Book Description Houghton Mifflin Co, 1972. Condition: Good. A+ Customer service! Satisfaction Guaranteed! Book is in Used-Good condition. Pages and cover are clean and intact. Used items may not include supplementary materials such as CDs or access codes. May show signs of minor shelf wear and contain limited notes and highlighting. Seller Inventory # 0395136466-2-4