Items related to Outsider in Amsterdam 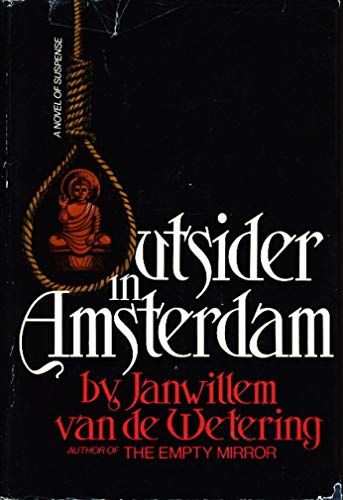 Piet Verboom is found dangling from a beam in the Hindist Society he ran as a restaurant-commune in a quiet Amsterdam street. Detective-Adjutant Gripstra and Sergeant de Gier of the Amsterdam police force are sent to investigate what looks like a simple suicide.

Outsider in Amsterdam is the first in the Amsterdam Cops series of internationally renowned mysteries.

Janwillem van de Wetering (1931–2008) was born and raised in Rotterdam, but lived most recently in Surry, Maine. He served as a member of the Amsterdam Special Constabulary and was once a Zen Buddhist monk. He is renowned for his detective fiction, including Outsider in Amsterdam; The Corpse on the Dike; the short story collection The Sergeant’s Cat; The Maine Massacre, which garnered him the Grand Prix de Littérature Policière; and ten other books in the Amsterdam Cops series.

Dear Sirs:
I thank you for your letter of the tenth and have to inform you

No further text. The letterhead looked expensive. hindist society, the address and the telephone number.
They saw a footstool, lying on its side, near the feet of the corpse. They saw a gramophone, a stack of records and a low bed covered with a batik cloth. The woven curtains were closed but allowed enough light to filter through to see every detail of the room.
“What’s that?” Grijpstra asked, pointing at another low table, covered with red lacquer and serving as a seat for a fairly large statue, a rather fat bald-headed man sitting cross-legged and staring at them with glass eyes.
“An altar of sorts,” de Gier answered after some thought. “That copper bowl filled with sand must be an incense burner, and the brown spots in the sand are burnt-out incense sticks.”
Grijpstra raised an eyebrow. “You know a lot today.”
“I visit museums,” de Gier said.
Grijpstra sniffed.
“Incense?” he asked.
De Gier nodded. The heavy sweet smell gave him a headache.
“Who discovered the body?” de Gier asked van Met-eren, who was standing near the door.
“I did,” van Meteren answered. “I had to ask Piet something and as he didn’t answer when I knocked, I went back to my room. A little later I asked the girls in the kitchen if they had seen him and they said he had gone upstairs. I looked into the other rooms; one of them belongs to his mother, and another is the temple. He wasn’t there. I thought he might be asleep and knocked again and then I opened the door and saw him hanging there. I telephoned the police and waited for you downstairs. Nobody knows anything yet.”
“Why didn’t you cut the rope?” asked de Gier.
“He was dead.”
“How did you know?”
Van Meteren didn’t answer.
“Are you a doctor?” Grijpstra asked.
“No,” van Meteren said, “but I have seen a lot of corpses in my life. Piet is dead. Dead is dead. I could feel it. A dead body has no feel.”
“Did you touch it?”
Van Meteren shrugged his shoulders. “I don’t have to feel a corpse to know it is dead.”
“So why didn’t you cut the rope?” asked de Gier again.
“I couldn’t do it by myself,” van Meteren said. “Somebody would have had to hold the body. Besides, I wanted you to find it the way it was. Perhaps it will give you a lead.”
De Gier looked again at the corpse. He had an idea that he had seen the man before and searched his memory. De Gier’s memory was well organized and he knew his way around his files. After a while he knew that he hadn’t seen the man before but that the strong chin, the long hair and the heavy mustache reminded him of a portrait he had seen in a museum in The Hague. A portrait of a Dutch statesman of the sixteenth century, a statesman and a warrior, on his way to do battle. The warrior had been sitting on a horse and had a sword in his hand. A leader. Very likely this man had also been a leader, a boss. A little boss in charge of a small society. Discipline, de Gier thought. That’s it. This house and this room reek of discipline. Everything is neat and clean. The girls in the kitchen are clean too, reasonably clean. Van Meteren is clean. There would be some connection between the corpse and van Meteren. Perhaps van Meteren is an employee of the Society. But why do I observe this? de Gier asked. The answer came immediately. He hadn’t expected cleanliness when he had read the sign on the door. HINDUIST SOCIETY. He had associated the words with a mess. The new wisdom coming from the East is a messy business. He thought of the dirty doped vague shadowy people he had arrested in the street and interrogated at Police Headquarters. Petty theft, drug dealing in a small silly way, runaway minors, prostitution. All suspects stank. He had made them empty their pockets before locking them up and had been appalled at the dirty rags, the broken trinkets, the lack of money. He had seen the photographs they carried around with them. Pictures of “holy men,” “gurus” or “yogis.” Skeletons with long matted hair and crazy eyes. The masters preaching the way.
He had associated the word hindist with Hinduism or Buddhism. The religions of the East. Before he had begun to arrest the crazy tramps the words had had a different association. Peace and quiet, some form of detachment. Real wisdom. But gradually “messiness" had crept in.
And now he had to admit that this place, this nest of nonsensical imitation faith, was, after all, clean. And he had been surprised. De Gier’s thoughts took a few seconds only and meanwhile Grijpstra had sighed again. The body was dead, no doubt about it, and they would have to cut the rope. They had to assume that the body was still alive. Only a doctor can determine death. He looked over his shoulder and nodded at de Gier.
“You can telephone headquarters, if you like.”
There was no need to say it. De Gier was dialing the number already. He didn’t have to say much. At headquarters the machine was already in operation. Within a few minutes they would be arriving. Doctor, ambulance and the experts.
While de Gier telephoned Grijpstra picked up the stool and put it right and climbed on top of it. He cut the rope with his switchblade, an illegal weapon that he carried against all regulations. The rope wasn’t thick and the knife very sharp. De Gier wanted to catch the corpse but van Meteren was quicker. He put the corpse down, very carefully, on the bed. No one thought that Piet would start breathing again.
He didn’t.