Items related to Gorillas in the Mist 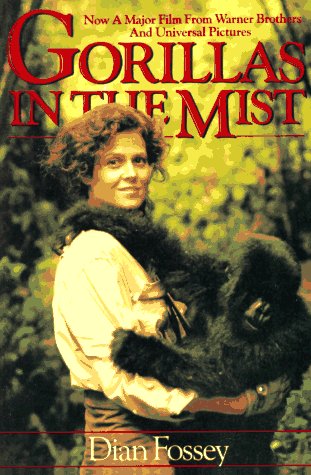 Although Dr. Fossey's work ended tragically with her murder, her book remains an enthralling testament to one of the longest field studies of primates, covering fifteen years in the lives of four gorilla families in Central Africa. Photos.

In 1963, an occupational therapist from Kentucky, in uncertain health and spirits, traveled to central Africa in the quixotic hope of seeing a mountain gorilla in its natural habitat. Dian Fossey had read everything she could about the reclusive and much-feared animal, and she returned from her trip convinced that most of the books were wrong.

During her seven-week stay in Africa, Fossey had a chance encounter with the famed primatologists Mary and Louis Leakey, who encouraged her to follow her dream of living among the mountain gorillas and learning their ways. In 1967 she did just that, setting up a camp on the slopes of the 14,000-foot Virunga Volcanoes of Rwanda and studying four gorilla families there. Although it took them some time to accept Fossey's presence among them, she was immediately impressed by their peaceful nature and by their generous, guileless behavior--so unlike the images found in popular culture.

But, Fossey discovered, despite their peaceable way of life, the gorillas had many enemies in the form of poachers who hunted them for their hands, skins, and heads--ghastly remains sold to the tourist market. Much of Fossey's thoughtful but often rightly angry memoir Gorillas in the Mist is a well-reasoned plea for the protection of the gorillas and the suppression of the poachers' black market. That argument found a wide audience when her book was published in 1983, but Fossey's work remains unfinished: she was murdered, probably by those very poachers, in 1985, and today there are fewer than 650 mountain gorillas in the wild. To read Gorillas in the Mist is a first step for anyone concerned with their preservation, and that of other wild species everywhere. --Gregory McNamee

Dian Fossey was an American zoologist, primatologist and anthropologist who studied gorillas over a period of 18 years in the mountain forests of Rwanda. Her best-known work, GORILLAS IN THE MIST, was adapted into a 1988 film starring Sigourney Weaver. Fossey was murdered in 1985.