Items related to Left Behind 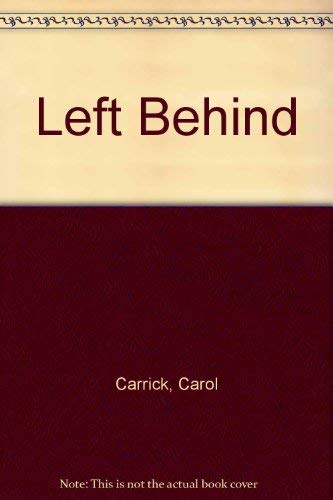 Christopher gets lost on the subway during an excursion to the aquarium and is afraid he'll never be reunited with his class.

Carol Carrick has written more than twenty-five well-received books for Clarion, including PATRICK'S DINOSAURS, one of the many books illustrated by her late husband, Donald Carrick. She lives in West Tisbury, Massachusetts.

In PW 's words, "The Carricks expertly create a dramatic situation and portray the inner feelings of a lost child. The illustrations aptly convey the confusion, Christopher's stark moments of real fear and the friendly clutter of the police station." Ages 5-8.
Copyright 1991 Reed Business Information, Inc.

Book Description Sandpiper, 1991. Condition: Good. Shows some signs of wear, and may have some markings on the inside. Seller Inventory # GRP37394782

Book Description Houghton Mifflin Harcourt Trade & Reference Publishers. Paperback. Condition: Good. A copy that has been read, but remains in clean condition. All pages are intact, and the cover is intact. The spine may show signs of wear. Pages can include limited notes and highlighting, and the copy can include previous owner inscriptions. At ThriftBooks, our motto is: Read More, Spend Less. Seller Inventory # G0395543800I3N00

Book Description Sandpiper, 1991. Condition: Good. Former Library book. Shows some signs of wear, and may have some markings on the inside. Seller Inventory # GRP105956976