Items related to Halmoni and the Picnic

Halmoni and the Picnic 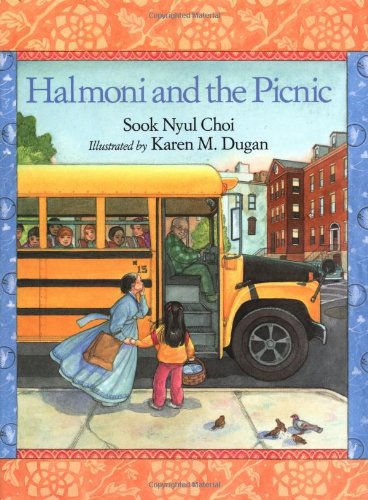 When Yunmi's class plans a picnic in Central Park, her Korean grandmother, Halmoni, agrees to chaperone. But Yunmi worries that the other children will make fun of Halmoni's traditional Korean dress and unfamiliar food.

Born in Pyongyang, North Korea, Sook Nyul Choi spent two and a half years as a refugee in Pusan during the Korean War. She later immigrated to the United States to pursue her college education at Manhattanville College. She taught school in New York City for twenty years while she and her husband raised two daughters. Echoes of the White Giraffe is a sequel to Sook Nyul Choi’s first novel, Year of Impossible Goodbyes, which won the Judy Lopez Children’s Book Award.

In her first picture book, Choi ( The Year of Impossible Goodbyes ) tackles the sensitive topic of an immigrant's adjustment to life in the United States. Yunmi's grandmother Halmoni has just moved to New York City from Korea and she's having a tough time getting acclimated. She doesn't speak much English, she doesn't understand the customs and she misses her homeland and her friends. In an effort to reach out to the old woman, Yunmi's friends ask Halmoni to chaperone the class picnic in Central Park. Yunmi is both excited and scared at the prospect--maybe the other kids will make fun of Halmoni's clothes and the traditional kimbap (rice/vegetable rolls) that she insists on bringing to the outing. But the children turn out to be fine ambassadors, and Halmoni feels pleased and welcome. Choi's text, sentimental but never saccharine, captures a jumble of emotions, both Halmoni's and Yunmi's. Both must find a common ground where pride, love and tolerance can coexist. With a light hand Choi delivers a happy ending. Dugan's serviceable pencil and watercolor illustrations are warm in spirit and accurate in their detail, as in depictions of Halmoni's dress. Bright Korean-inspired borders framing each painting provide an authentic flavor. This gentle intergenerational book should appeal on many levels, and will be especially appreciated by those seeking contemporary Asian American fare. Ages 4-8.
Copyright 1993 Reed Business Information, Inc.

1. Halmoni and the Picnic

2. Halmoni and the Picnic

3. Halmoni and the Picnic

4. Halmoni and the Picnic

5. Halmoni and the Picnic Choi, Sook Nyul and Dugan, Karen

6. Halmoni and the Picnic

7. Halmoni and the Picnic Choi, Sook Nyul and Dugan, Karen