Items related to If It Hadn't Been for Yoon Jun

Lee, Marie G. If It Hadn't Been for Yoon Jun

If It Hadn't Been for Yoon Jun 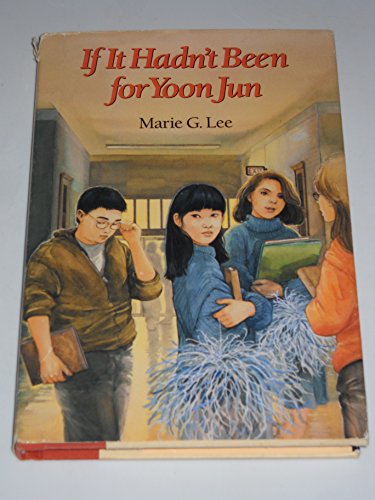 For Alice Larsen, a young Korean girl adopted as a baby by American parents, life is wonderful, until the arrival of Korean immigrant Yoon Jun and the encouragement of her parents leads her to take an interest in her Asian heritage.

Marie G. Lee is a second-generation Korean American who was born and raised in Hibbing, Minnesota. Her books include If It Hadn't Been for Yoon Jun, Necessary Roughness, and Night of the Chupacabras. Her work has appeared in The New York Times, The Kenyon Review, and several anthologies. She has appeared on PBS's "Asian American" and is a founder of the Asian American Writer's Workshop.

Though for a younger audience, Lee's second shares concerns about race with her fine debut, Finding My Voice (1992). Alice, Korean by birth but adopted as a baby, is a fully assimilated, typical teenager; she made the cheerleading squad and is gaining the attention of one of her school's cutest boys. Her pastor father, who frequently suggests that she take more interest in her background, asks her to meet and be kind to a new Korean boy. But Yoon Jun speaks little English and is pudgy and ``foreign''; Alice, who thinks of herself as American, hates being lumped with him in either thoughtless comments of friends or malicious name- calling (both are called ``gooks'' at one point). After a school project brings the two together, Alice begins to appreciate her cultural roots and, in a gratuitous ending, Yoon Jun saves her life by throwing her out of the path of an oncoming car. Although Lee strives to make Alice's dilemma real, both Alice and Yoon Jun seem grafted onto what is otherwise a formula look at junior high. Lee's perspective is only too welcome, but a worn-out rendering does it little service. Disappointing. (Fiction. 8-12) -- Copyright ©1993, Kirkus Associates, LP. All rights reserved.

1. IF IT HADNT BEEN FOR YOON JUN CL