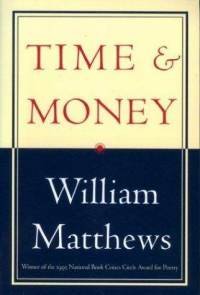 A new collection by a worldly and cynical writer addresses his lifetime losses and loves, offering his observations on such topics as musicians ("They have to hit the note/and the emotion") and money ("it's math/with consequences").

Late in his life, William Matthews left us with Time and Money, winner of the National Book Critics Circle Award. It is a meditation on loss and grace that some of us will be thinking about for a long time. "Bob Marley's Hair," which discusses the famed musician's dreadlocks falling out during chemotherapy, is as poignant as, well, "Babe Ruth at the End," the story of Ruth on his deathbed. The real gem, though, is "Dead Languages," a study in how, to use Frost's expression, "way leads on to way." Matthews tosses out fascinating examples of how words have evolved, how "Live English lugs a dead language inside." The way language mutates its way through the world, unconscious of its own changes, Matthews writes, isn't far from our own dimly understood lives: "We did what we did, we're / not proud nor ashamed, we led our lives / or they led us, and how would we know which?"

William Matthews won the National Book Critics Circle Award in 1995 and the Ruth Lilly Award of the Modern Poetry Association in 1997. Born in Cincinnati in 1942, he was educated at Yale University and the University of North Carolina. At the time of his death in 1997, he was a professor of English and director of the writing program at the City University of New York.