Items related to Nothing But the Truth: A Documentary Novel and Related...

Avi Nothing But the Truth: A Documentary Novel and Related Readings 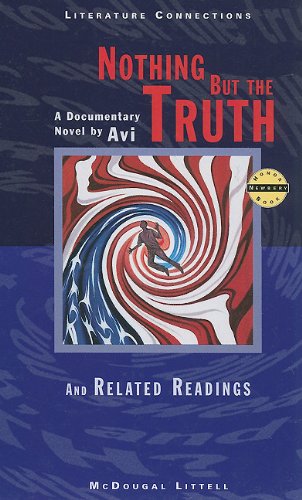 A textbook reader for young adults features "Nothing but the truth" by Avi, plus short stories, poems, and essays designed to build reading comprehension.

Avi is the author of the Newbery Medal-winning Crispin: The Cross of Lead and the Newbery Honor Books Nothing But the Truth and The True Confessions of Charlotte Doyle. He also writes the beloved Poppy stories, an animal adventure series that includes Ragweed; Poppy, winner of the Boston Globe-Horn Book Award; Poppy and Rye; Ereth's Birthday; Poppy's Return; and Poppy and Ereth. His many other critically acclaimed books include Don't You Know There's a War On?, the hilarious animal fantasy The Mayor of Central Park, and the Victorian ghost story The Seer of Shadows. Avi lives in Denver, Colorado.