Items related to The Best American Short Stories of the Century (The... 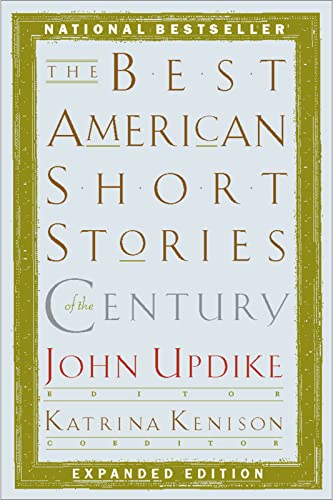 Since the series' inception in 1915, the annual volumes of The Best American Short Stories have launched literary careers, showcased the most compelling stories of each year, and confirmed for all time the significance of the short story in our national literature. Now THE BEST AMERICAN SHORT STORIES OF THE CENTURY brings together the best of the best - fifty-five extraordinary stories that represent a century's worth of unsurpassed accomplishments in this quintessentially American literary genre. Here are the stories that have endured the test of time: masterworks by such writers as Ernest Hemingway, William Faulkner, Willa Cather, F. Scott Fitzgerald, William Saroyan, Flannery O'Connor, John Cheever, Eudora Welty, Philip Roth, Joyce Carol Oates, Raymond Carver, Cynthia Ozick, and scores of others. These are the writers who have shaped and defined the landscape of the American short story, who have unflinchingly explored all aspects of the human condition, and whose works will continue to speak to us as we enter the next century. Their artistry is represented splendidly in these pages. THE BEST AMERICAN SHORT STORIES series has also always been known for making literary discoveries, and discovery proved to be an essential part of selecting the stories for this volume too. Collections from years past yielded a rich harvest of surprises, stories that may have been forgotten but still retain their relevance and luster. The result is a volume that not only gathers some of the most significant stories of our century between two covers but resurrects a handful of lost literary gems as well. Of all the great writers whose work has appeared in the series, only John Updike's contributions have spanned five consecutive decades, from his first appearance, in 1959. Updike worked with coeditor Katrina Kenison to choose stories from each decade that meet his own high standards of literary quality.

At age 67, the perennially youthful John Updike may at last qualify as something of an elder statesman. But the Best American Short Stories annual--whose greatest hits package Updike has now assembled--is almost a generation older, having commenced publication in 1915. This staying power allows the hefty Best American Short Stories of the Century to perform double duty. It is, on the one hand, a priceless compendium of American manners and morals--a decade-by-decade survey of how we lived then, and how we live now. Yet Updike very consciously avoided the sociological angle in making his selection. "I tried not to select stories because they illustrated a theme or portion of the national experience," he writes in his introduction, "but because they struck me as lively, beautiful, believable, and, in the human news they brought, important." In this he succeeded: the 55 fictions that made the grade are most notable for their human (rather than merely historical) interest.

So who got in? There are a good number of cut-and-dried classics here, including Hemingway's "The Killers," Faulkner's "That Evening Sun Go Down," and Philip Roth's acidic spin on religious connivance, "Defender of the Faith." In other cases, major authors are represented by relatively minor works. Yet it's hard to quibble with the inclusion of Willa Cather, F. Scott Fitzgerald, Tennessee Williams, J.F. Powers, Eudora Welty--particularly when you take into account that their second-tier creations are fully the equal of anybody else's masterpieces. And the final third of the book really does constitute an honor roll of contemporary American fiction, with brilliant entries by Saul Bellow, Donald Barthelme, Raymond Carver, Tim O'Brien, Bernard Malamud, Cynthia Ozick, John Cheever, and Vladimir Nabokov. (For the latter, Updike actually succumbed to his own idolatry and bent the rules for admission--but nobody who reads the hallucinatory "That in Aleppo Once..." will regret it.) It goes without saying that fiction fans will be complaining about the editor's sins of omission well into the next century. But no matter how you slice it, this remains an elegant and essential advertisement for the short form. --James Marcus

5. The Best American Short Stories of the Century

8. The Best American Short Stories of the Century

9. The Best American Short Stories of the Century

10. The Best American Short Stories of the Century (Paperback)

Book Description Paperback. Condition: new. Paperback. Since the series&#039; inception in 1915, the annual volumes of The Best American Short Stories have launched literary careers, showcased the most compelling stories of each year, and confirmed for all time the significance of the short story in our national literature. Now THE BEST AMERICAN SHORT STORIES OF THE CENTURY brings together the best &mdash; fifty-six extraordinary stories that represent a century&#039;s worth of unsurpassed achievements in this quintessentially American literary genre. This expanded edition includes a new story from The Best American Short Stories 1999 to round out the century, as well as an index including every story published in the series. Of all the writers whose work has appeared in the series, only John Updike has been represented in each of the last five decades, from his first appearance, in 1959, to his most recent, in 1998. Updike worked with coeditor Katrina Kenison to choose the finest stories from the years since 1915. The result is &quot;extraordinary . . . A one-volume literary history of this country&#039;s immeasurable pains and near-infinite hopes&quot; (Boston Globe). Including one new story and an Index by author of every story that has ever appeared in the series, this new volume offers a &quot;spectacular tapestry of fictional achievement&quot; (&quot;Entertainment Weekly&quot;). Shipping may be from multiple locations in the US or from the UK, depending on stock availability. Seller Inventory # 9780395843673