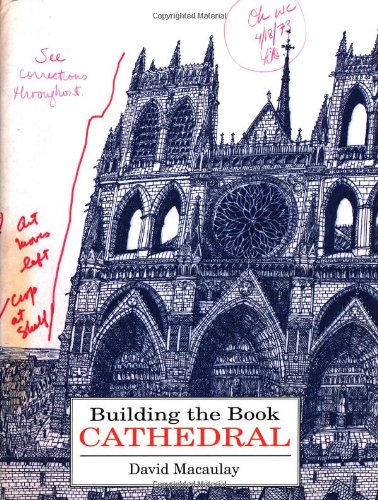 It has been twenty-six years since the publication of CATHEDRAL. David Macaulay's first book, CATHEDRAL, introduced readers around the world to his unique gift for presenting architecture and technology in simple terms, and for demystifying even the most complex of concepts. CATHEDRAL received a Caldecott Honor Medal and is now considered a classic. BUILDING THE BOOK CATHEDRAL includes the content of CATHEDRAL in its entirety. Here Macaulay traces the evolution of his creative process in "building" that first book, from the initial concept to the finished drawings. He introduces the basic elements of structure and sequence and explains why one angle of a drawing may be better for conveying an idea than another. He describes how perspective, scale, and contrast can be used to connect a reader with concepts, and how placement of a picture on a page can make a difference in the way information is communicated. Building the Book Cathedral provides an opportunity to examine Macaulay's unique problem-solving skills as he looks back over two and a half decades at the book that launched his distinguished career.

On its twenty-fifth anniversary, the author recounts the origins of his first book and suggests revisions he'd make in light of what he's learned ("the drawings for Cathedral were among my first serious attempts at working with pen and ink. They are understandably timid," he confides). Indeed, seeing how this Caldecott winner would alter a perennial favorite is as fascinating as becoming privy to its origins. Most of the original Cathedral: The Story of Its Construction is reproduced in this oversize celebratory volume, along with lots of preliminary sketches, new commentary, and revised, or newly deployed, art. Page design is improved with different cropping; drama and coherence are enhanced by new placement on the spread; size is changed for emphasis and variety; a bird's-eye view of the choir is rotated for a more vertiginous effect. There are also minor revisions of text and art for clarity, plus some rueful admissions (handsome as the shafts of light on page 109 may be, the sun could never shine into the nave from the north; the rope would go around the axle of the huge weight-lifting wheel, not circle its circumference-a gaffe duly corrected after the first edition, but "the scale of the bucket is still wrong. It looks like a medieval hot tub"). Such touches of informal humor further enliven a book that's already mesmerizing for both its original content and its insights into this author-illustrator's incisive, ebulliently creative mind.
Horn Book

Everyone who enjoys learning about the mysterious inner workings of anything, and particularly everyone interested in the creative process, will find this semi-confessional and somewhat instructional volume engrossing. The New York Times