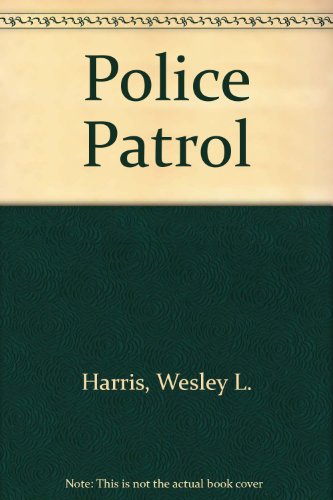 The "little things" are often dismissed as irrelevant or insignificant at police academies. Even on the street, some arrests are attributed to luck rather than good police work. Police officers, therefore, discover only after months or even years in the field these simple techniques for doing their jobs more effectively. This book helps them learn these things before they hit the street.

PREFACE When I first read the original “Police Patrol” by Richard Holcomb, I was fascinated by the little tidbits of advice the author gave for improving my performance as a patrol officer. Each brief chapter contained a valuable suggestion, many of which I had never before considered. Many were minor considerations, but it's often the little things that separate the average officers from the outstanding ones. After several years in police work, both as a patrol officer and a trainer, I realized these "little things" are often dismissed as irrelevant or insignificant at police academies. Even on the street, some arrests are attributed to luck rather than good police work. Police officers, therefore, discover only after months or even years in the field these simple techniques for doing their jobs more effectively. Why can't they learn these things before they hit the street? Police Patrol was first published shortly after World War II and originally dealt largely with foot patrol. The terminology of the original book is now outdated (suspects drove DeSotos and LaSalles), and more complex problems and issues face contemporary law enforcement. Today, that first version of Police Patrol might even be humorous reading, but the basic message is still invaluable and applicable to modern police work. This rendition of Police Patrol has been completely updated and modernized without destroying Richard Holcomb's original message. I have also added some messages of my own. Hopefully, this little book can help you become a better patrol officer as it helped me. Wesley Harris Ruston, Louisiana

Chapter I - THE FRONT LINE

POLICE PATROL is the first line of defense against crime. The officer on the beat performs the day-by-day work that makes or breaks a law enforcement agency, that controls the vast majority of criminal activity and forms the basis of the police function: to protect life and property and serve the public.
I once overheard an officer saying, "I get paid just enough to get in my patrol car and ride around." It is obvious that officer will not actually be patrolling but merely riding the streets. There is a difference. Patrol must be active. It involves all the senses and a great deal of energy when performed properly. Police patrol is much more than riding around in a vehicle. However, some officers actually see the operation of a patrol car, not as a means of accomplishing their jobs, but as the job itself.
From its very name, patrolling describes an often unpleasant activity. The term is derived from the French "patrouiller," meaning "to tramp through puddles." Good patrolling means going through puddles and garbagefilled alleys, up rickety back stairs, through snow and sleet and rain, day and night, winter and summer. The criminal can choose the time and place he wants to work. The officer, unaware of the criminal's schedule, must engage in continuous and aggressive patrol to be effective.
Patrol is the first line of defense against crime.
There has been much controversy concerning the effectiveness of police patrol. Conflicting research makes it difficult to determine whether patrol makes any difference in the crime rate of a community. The latest research, however, does indicate that patrol performed in the right way does make a difference.
Patrol should be a process of actively observing and searching an assigned area in order to prevent crime, apprehend violators, and detect the need for other law enforcement services, When active patrol methods are utilized, law enforcement can be more effective in combatting crime.
There is more to patrol than riding or walking the streets waiting for a call. If patrol was only something to do while awaiting calls, officers might as well sit at the station and wait for the phone to ring. This procedure sounds convenient but it does little to prevent crime by the presence of police patrols. Few violators come to the police station to surrender themselves, and there are numerous situations on the street where it is necessary for police officers to analyze the problem and take action.
Some officers ride their zones or beats cut off from the world outside their patrol vehicles. They rarely stop traffic violators or check out suspicious persons. They worry about nothing around them until they are given an assignment. Their only accomplishment is making a patrol unit visible on the street.
Good patrol officers perform their jobs in a more "active' or aggressive manner. This does not mean they have a "lock 'em-all-up" attitude but that they maximize their observations and interventions with the public. They stop violators when observed. They get out of their patrol cars and investigate things that "just dont look right." Research has indicated that active patrol prevents more crime than passive, non-stop patrol (which is really nothing more than riding the streets).
Effective patrol is not something that the new officer can accomplish immediately. It takes training and experience. The officer has to know what to look for on patrol and how to tell when something is wrong or out of place.
More officers are assigned to patrol duty than any other police activity. It is unfortunate, then, that so little effort has been made to educate police officers in what they do most: patrol. Scores of books have been published and hundreds of seminars held on criminal investigation, accident investigation, supervision, and police administration but comparatively little on basic patrol techniques.
The following chapters cover some of the fundamental techniques utilized by patrol officers. Many good officers use these techniques, although they may never have read about them or even thought of them as "techniques." It would be impossible to explain how to handle every situation an officer will encounter or to list every proven method that has worked in the past. Hopefully, the patrol officer will find the information here practical and very applicable to the performance of his duties in a safe and effective manner.