Items related to Working with Truman 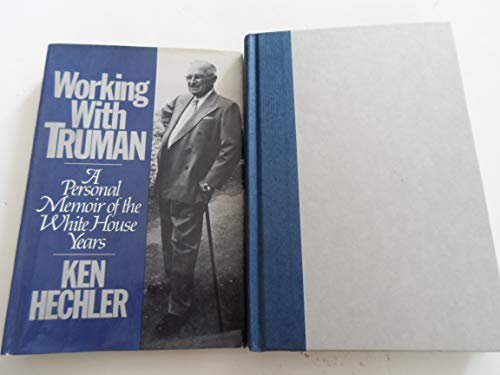 Presents a personal, behind-the-scenes account of the Truman presidency, focusing on Truman's roles as commander in chief, chief executive, foreign-policy leader, social head of state, and leader of the Democratic Party

After working as White House Research Director for President Harry S. Truman, Ken Hechler served as the U.S. Congressman from West Virginia from 1959 to 1977 before becoming Secretary of State for West Virginia. He is the author of numerous articles and books, including The Bridge at Remagen. Hechler lives in Huntington, West Virginia.

"I enjoyed Ken Hechler's book very much. It brought back a lot of wonderful memories."--Margaret Truman

"The 33rd President who emerges from Mr. Hechler's pages is a loving husband and father, a man loyal to old friends even when it led to political embarrassment, an ardent history buff, a relaxed friend when vacationing with his staff. [This book] has some interesting things to say about the firing of Gen. Douglas MacArthur, the 'Korean incident' and the rage of McCarthyism. Much of this has been printed before in other contexts . . . but politics and history buffs will find Mr. Hechler's version warm and welcome."--New York Times Book Review

"An enthralling portrait of a most uncommon 'common' man. Harry Truman's wit, vision and robust common sense shine through the stories Ken Hechler has assembled so artfully and told so well."--Former Vice President Walter F. Mondale