Items related to R is for Ricochet (A Kinsey Millhone Novel)

Grafton, Sue R is for Ricochet (A Kinsey Millhone Novel) 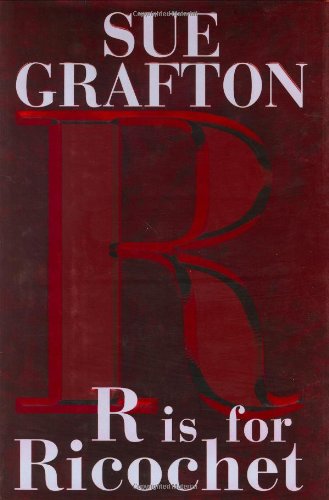 Reba Lafferty was a daughter of privilege. Abandoned by her rebellious mother when she was an infant, she was the only child of a rich man already in his mid-fifties when she was born, and her adoring father thoroughly spoiled her. Now, at thirty-two, having had many scrapes with the law, she is about to be released on probation from the California Institution for Women, having served twenty-two months of a four-year sentence for embezzlement. Though Nord Lafferty could deny his daughter nothing, he wasn’t there for her when she was brought up on this charge. Now he wants to be sure she stays straight, stays at home and away from the drugs, the booze, the gamblers.

It seems a straightforward assignment for Kinsey: babysit Reba until she settles in, make sure she follows all the niceties of her parole. Maybe a week’s work. Nothing untoward—the woman seems remorseful and friendly. And the money is good.

But life is never that simple, and Reba is out of prison less than twenty-four hours when one of her old crowd comes circling round.

R is for Ricochet. And R is for romance: love gone right, love gone wrong, and matters somewhere in between.

When wealthy octogenarian Nord Lafferty hires Kinsey Millhone to help his newly paroled daughter find her way back to the straight and narrow after doing time for embezzlement, the Santa Teresa P.I. has no idea what she's getting into. Reba Lafferty's ex-boss, land developer Alan Beckwith, is the man who sent her to prison--so how come she's meeting him just hours after her release, and treating Kinsey to an X-rated reunion scene played out in his parked Mercedes? And why is he also playing sex games with Reba's formerly best friend, who still works for him? A visit from an old friend from the FBI clears up the mystery--Beckwith is suspected of running a money-laundering game, and they need Reba to make their case by rolling over on him. It’s not until Millhone presents Reba with photographic evidence of Beckwith's two-timing that she agrees to do what the Feds want... but she'll only do it her way, which could get a lot of people killed. Grafton fleshes out this well-crafted thriller with a romantic subplot involving a romantic triangle that features Kinsey's elderly landlord Henry, his brother, and a vivacious widow who can't seem to choose between them. It doesn't add much to the plot, but the fans of this evergreen series (who must be wondering what will happen to Millhone when Grafton gets to the end of the alphabet) probably won't mind a bit. --Jane Adams

New York Times bestselling author Sue Grafton is published in 28 countries and 26 languages—including Estonian, Bulgarian, and Indonesian. Books in her alphabet series, begun in 1982, are international bestsellers with readership in the millions. And like Raymond Chandler, Ross Macdonald, Robert Parker, and John D. MacDonald—the best of her breed—Sue Grafton has earned new respect for the mystery form. Her readers appreciate her buoyant style, her eye for detail, her deft hand with character, her acute social observances, and her abundant storytelling talents.

Sue divides her time between Montecito, California and Louisville, Kentucky, where she was born and raised. She has three children and two grandchildren. Grafton has been married to Steve Humphrey for more than twenty years. She loves cats, gardens, and good cuisine.

R Is for Ricochet

Book Description Hardcover. Condition: New. All books are mailed out in a bubble wrap mailer to protect your purchase. Orders are ALWAYS shipped same day or next day with FREE TRACKING emailed to you automatically. (WE TRY HARD TO DESCRIBE OUR BOOKS ACCURATELY SO YOU CAN BUY WITH CONFIDENCE). Seller Inventory # 352D3X000UWY

R is for Ricochet

R is for Ricochet (A Kinsey Millhone Novel) Grafton, Sue

R IS FOR RICOCHET; a.

R Is for Ricochet