Items related to Under Enemy Colors 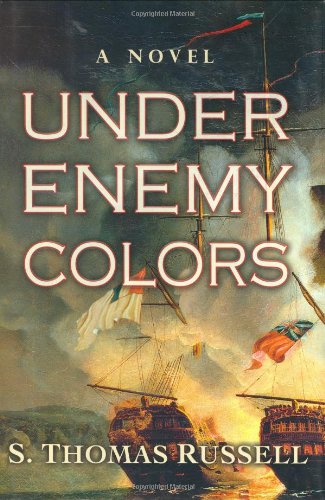 His career challenged by a mixed heritage in spite of his loyalty to the king of England, French Revolution-era naval officer Charles Saunders Hayden finds himself aboard an aging frigate that becomes subject to violent crew outbursts and mutiny.

S. Thomas Russell is a lifelong sailor whose passion for the sea-and his love of nautical history-inspired Under Enemy Colors.

UNDER ENEMY COLORS is a triumph. Set aboard a frigate at sea off the coast of France at the height of British naval power, this gripping novel combines a simple war story with a tale of infuriating office politics, cowardly leadership, and one manÕs struggle to remain loyal to his king, an inept commander, and a seething crew. Simon Vance could well earn another Audie nomination with this superb reading. He expertly navigates a complicated story with many characters and a great deal of dialogue, set in a formal style of the period. While accents can too often be the downfall of a good audiobook, Vance makes them an asset. He uses an array of voices to allow the listener to follow the fast-paced dialogue effortlessly. This is a terrific story, enjoyably told. J.B.B. Winner of AudioFile Earphones Award © AudioFile 2008, Portland, Maine-- Copyright © AudioFile, Portland, Maine