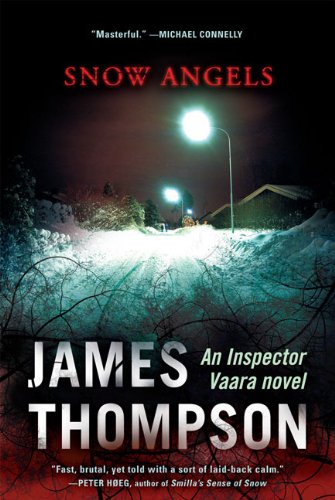 The first thriller in a new series featuring Inspector Kari Vaara: the haunted, hardened detective who must delve into Finland's dark and violent underbelly.

Kaamos: Just before Christmas, the bleakest time of the year in Lapland. The unrelenting darkness and extreme cold above the Arctic Circle drive everyone just a little insane . . . perhaps enough to kill.

A beautiful Somali immigrant is found dead in a snowfield, her body gruesomely mutilated, a racial slur carved into her chest. Heading the murder investigation is Inspector Kari Vaara, the lead detective of the small-town police force. The vicious killing may have been a hate crime, a sex crime-or one and the same. Vaara knows he must keep this potentially ex­plosive case out of the national headlines or else it will send shock waves across Finland, an insular nation afraid to face its own xenophobia.

The demands of the investigation begin to take their toll on Vaara and his marriage. His young American wife, Kate, newly pregnant with their first child, is struggling to adapt to both the unforgiving Arctic climate and the Finnish culture of silence and isolation. Meanwhile Vaara himself, haunted by his rough childhood and failed first marriage, discovers that the past keeps biting at his heels: He suspects that the rich man for whom his ex-wife left him years ago may be the killer.

Endless night can drive anyone to murder.

James Thompson, eastern Kentucky born and raised, has lived in Finland for the past decade and currently makes his home in Helsinki with his wife. Before becoming a full-time writer, Thompson studied Swedish and Finnish, in which he is fluent, and worked as a bartender, bouncer, construction worker, photographer, rare coin dealer, and soldier.

Disclaimer: Please be advised that this excerpt contains some graphic language.

I’m in Hullu Poro, The Crazy Reindeer, the biggest bar and restaurant in this part of the Arctic Circle. It was remodeled not long ago, but pine boards line the walls and ceiling, like an old Finnish farmhouse. Nouveau rustic decor.

Even though it’s early afternoon, a couple hundred people are here. The bar is crowded and noisy. It’s minus forty degrees Celsius outside, too cold to ski. The rush of wind from racing downhill would cause instant frostbite on even the smallest patch of exposed skin. The lifts are closed, so people are drinking instead.

My wife, Kate, is the general manager of Levi Center, a complex of restaurants, bars, a two-hundred-room hotel and an entertainment arena that holds almost a thousand people. Hullu Poro is only part of a massive operation in the biggest ski resort in Finland, and Kate runs it all. I’m proud of her.

Kate is behind the bar, talking to Tuuli, the shift manager. I’m eavesdropping on their conversation because I’m a cop, and Kate may want to have Tuuli arrested.

“I think you played with the inventory on the computer,” Kate says. “You transferred liquor to other sales points, made it look like it disappeared from other bars, but you brought the bottles here, sold them out of this bar and pocketed the money.”

Tuuli smiles and replies in Finnish. In a calm voice, she unleashes an eloquent stream of vicious invective. Kate has no idea of the ways in which Tuuli has insulted her.

Kate is five foot ten and slim. She’s wearing jeans and a cashmere sweater. Her long cinnamon hair is swept up in a chignon. Men around the bar sneak glances at her.

"Please speak English so I can understand you,” Kate says. “If you can’t explain where the liquor went, you’re fired. I’m considering pressing charges against you.”

Tuuli’s face is unreadable. “You don’t know what you’re talking about.”

Kate is an expert in ski resort management. The owners of Levi Center wanted to expand the resort, so they brought her here to Finland from Aspen a year and a half ago to oversee the changes.

“I checked the dates and times on the computer system,” Kate says. “The inventory transfers are consistent with times you were on duty. No one else could have done it. Six hundred euros worth of liquor went missing last month. You’ve been working here for three months. Want me to check the other two months?”

Tuuli mulls it over. “If you give me a week’s pay and a letter of recommendation,” she says, “I’ll resign without protesting to the union.”

Kate folds her arms. “No severance pay, no letter. If you file a protest, I’ll prosecute.”

Tuuli fingers a bottle of Johnny Walker on the shelf. The dull shine of her eyes tells me some of the stolen booze has been going down her throat. I know drunks. She’s considering bludgeoning Kate with the bottle. She glances at me and I shake my head. Tuuli takes her hand off the bottle and tries the conciliatory approach.

“Let’s sit down and talk about this.”

Kate signals to the bouncer at the front door and he comes over. “This conversation is over,” she says. “Take Tuuli to get her things, then escort her out. She’s banned from the bar.”

Kate smiles. “And you’re unemployed. You’re also banned from every bar in Levi owned by this firm.”

That’s most of them. In effect, Tuuli is ostracized. She clenches her teeth and fists.“Vitun huora.” Fucking whore.

Kate looks at the bouncer. “Get her out of here.”

He puts a hand on Tuuli’s shoulder and guides her away.

When Kate turns to me, she looks ice-calm. “I have to do a couple things in the office, I’ll just be a few minutes.”

I lean on the bar while I wait for her. A tourist asks Jaska, the bartender, “Just how far north are we?”

Jaska puts on the condescending face he reserves for foreigners.

“You Australians aren’t too good with . . . ” he can’t find the word and reverts to Finnish. “Maantiede. Drive that way for one day and you reach the Barents Sea, the end of the world.” He’s pointing west.

“Some Finns aren’t too good with geography either,” I say. “That way is toward Sweden.” I turn ninety degrees. “The North Pole is that way.” I point east. “Russia is over there. We’re a hundred miles inside the Arctic Circle.”

“Inspector Vaara and I went to high school together,” Jaska says. “He got better grades than me.”

“Thanks for the lesson,” the Aussie says. “It’s hard to get oriented when it’s dark all the time. You’re a policeman?”

“Have one on me officer. What are you drinking?”

“Beer. We had a gold rush in the Arctic a little over a hundred years ago, and the brand name means ‘The Gold of Lapland.’ ”

Jaska makes drinks for the tourists and chats about skiing conditions.

It’s supposed to warm up to minus fifteen tomorrow, still bitter cold, but safe enough so that with proper clothing skiers can hit the slopes again.

It’s good for me to make my presence felt here, to discourage locals whose idea of a good time is to get drunk and beat up or otherwise harass tourists. I look to the other side of the room. The Virtanen brothers are here, prime candidates for such behavior. By the end of the night, like as not, they’ll pull knives on each other. One of these days one will kill the other, and the survivor will die of loneliness.

Jaska hands me my beer. “Jotain muuta?” Anything else?

“A ginger ale for Kate.”

While Jaska gets it for her, I go over to the Virtanen brothers’ table. “Kimmo, Esa, how’s it going?”

The brothers look sheepish. My presence makes them nervous.

My marriage to a foreigner causes suspicion and consternation among the less progressive thinkers of our small community, but also envy, because of Kate’s success and good looks.

“Mom can’t speak since the stroke, and— you know how he is— Dad is Dad,” Esa says, and Kimmo nods drunken agreement.

Esa and Kimmo and I grew up in the same neighborhood. Esa means their father has been drunk for weeks. Every winter he stays tanked on cheap Russian medical alcohol through kaamos, the dark time, until spring, and even then his sobriety is measured only in relation to his alcohol-induced winter coma. I wonder if their mother can’t speak, or if she’s so worn out that she has nothing left to say. “Give them my best. You two stay out of trouble tonight.”

Kate comes out from the back room. I get our drinks and we go to a table in the nonsmoking section.

I set her ginger ale on the table in front of her.

“Kiitos.” Thank you. She can’t speak Finnish yet, but she tries to use the few words and phrases she knows. “I could use a beer right now,” she says, “but I guess I’m going to have to wait seven months for my next one.”

Kate is pregnant with our first child. She told me two weeks ago while we celebrated our birthdays. We were born two days shy of eleven years apart, on opposite sides of the world.

Kate has put away her tough facade. She’s trembling. “Tuuli,” she says, “is not a pleasant person.”

“She’s a thief. Why didn’t you have me arrest her?”

“Recovering the small amount she stole doesn’t balance against the bad press associated with theft by an employee. Word will get around. That’s why I fired her in front of Jaska. If anyone else is stealing, they’ll stop.”

“You have the day off tomorrow?” I ask. “You could use one.”

I don’t want her to, but can’t think of a reasonable objection.

“Do you think you should?”

She takes my hand. Before I met Kate, I didn’t like public displays of affection, but now I can’t remember why. “I’m pregnant,” she says, “not crippled.”

In fact, we’re both slightly crippled. Me from a gun shot, Kate from a skiing accident that shattered her hip. We both limp. “Okay, I’ll go ice fishing.”

She closes her eyes for a second, stops smiling and rubs her temples.

“You feeling all right?” I ask.

She sighs. “When I first came to Finland to interview for my job, it was summer. The sun was up twenty-four hours a day. Everyone here seemed so happy. I met you. They offered me a lot of money to run Levi, a great career opportunity. The Arctic Circle seemed exotic, an exciting place to live.”

She looks down at the table. Kate isn’t given to complaining. I want to know what’s on her mind, so I prod her. “What changed?”

“This winter, I feel like the cold and dark will never end. I ge...