Items related to Heads You Lose 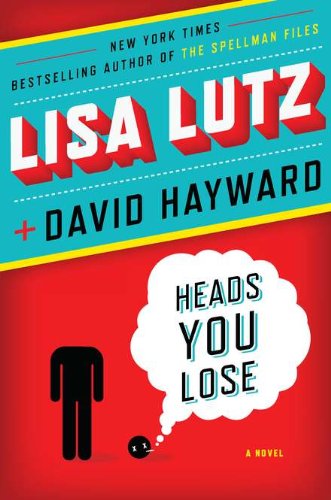 Meet Paul and Lacey Hansen: orphaned, pot-growing twentysomething siblings eking out a living in rural Northern California. When a headless corpse appears on their property, they can't exactly dial 911, so they move the body and wait for the police to find it. Instead, the corpse reappears, a few days riper . . . and an amateur sleuth is born. Make that two.

When collaborators Lutz and Hayward (former romantic partners) start to disagree about how the story should unfold, the body count rises, victims and suspects alike develop surprising characteristics (meet Brandy Chester, the stripper with the Mensa IQ), and sibling rivalry reaches homicidal intensity. Think Adaptation crossed with Weeds. Will the authors solve the mystery without killing each other first?

Lisa Lutz is the New York Times-bestselling author of the Spellman comedic crime novels. Since 2007, the Spellman series has received Edgar, Anthony, and Macavity nominations, and each title has been a selection of the Indie Next List. Lutz lives in San Francisco.

David Hayward is a writer and editor in Northern California. His poetry has won a Pushcart Prize and has appeared in Harper's and other magazines. Hayward has an MFA in poetry from the University of California at Irvine. This is his first novel.

In this experimental California improv, Lutz (The Spellman Files) writes odd-numbered chapters and footnoted barbs directed at her coauthor and ex-boyfriend, poet Hayward, whose even-numbered chapters and stiletto-sharp ripostes add a freaky dimension to the collaboration. Grown siblings Lacey and Paul Hansen are scratching out a precarious living from a Northern California clandestine marijuana operation when a reeking headless human body turns up in their backyard, eventually identified as Hart Drexel, detecting barista Lacey's former lover. Because Lutz and Hayward agreed not to discuss or to undo a plot development the other had produced, they create a jittery black-comic narrative complicated by inter-author tensions unveiled in memos exchanged at the end of each chapter. Shifty secondary characters, some charming, some odious, pop in and out of the resulting dizzying plot that comes off like a trendy Left Coast restaurant mélange—daringly composed, exotic to contemplate. Author tour. (Apr.)
(c) Copyright PWxyz, LLC. All rights reserved.