Items related to We Were Tired of Living in a House

Liesel Moak Skorpen We Were Tired of Living in a House

We Were Tired of Living in a House 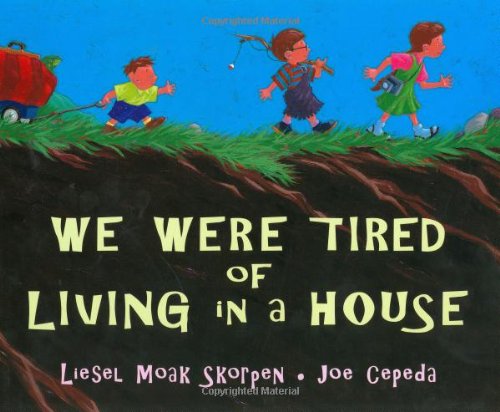 Three children decide to find a new place to live, and although the treehouse and raft and cave and sandcastle are nice, each one gets scarier, until they end up back at the perfect home, which happens to be where they started.

PreSchool-Grade 2-Youngsters who have found fault with their living conditions will revel in this story of three siblings who leave home to seek more exciting housing. They love life in their tree-until they fall out of it. Similarly, in each new residence-they subsequently try a pond, a cave, and the sea-they are content until disaster strikes. They finally end up back home where their parents greet them with open arms. The text, originally published in 1969 (Coward, McCann & Geoghegan; o.p.), is delightfully lyrical, patterned, and filled with alliteration. There are "turrets and towers," "salty water and warm sea sand," and "seashells singing the songs of the surf." Cepeda's brilliantly colored oil paintings are filled with humor befitting the outlandish theme. The older girl and her two younger brothers, one of them wearing huge glasses, carry their meager belongings in a wagon, adding treasures as they travel. They hang upside down from tree branches, explore pond life with a spyglass, wear a mining hard hat in their cave, and use a metal detector at the seashore. The book is cleverly designed so that each disaster is uncovered with the turn of a page: "We liked our cave,...until we met the bears." Young readers will chime in on the "until" in gleeful anticipation. Be sure to give this gem a home.
Marianne Saccardi, Norwalk Community-Technical College, CT
Copyright 1999 Reed Business Information, Inc.

In this lighthearted cumulative romp, three young siblings pack a bag with sweaters, socks, mittens and earmuffs and search out alternative dwellings. They enjoy living in a tree, until they tumble out; on a raft in a pond, until it sinks; and in a sand castle by the sea, until the tide comes in. With each move, the children add another item to their bag: in the end their possessions include "scarlet leaves and gold/ and a frog who was a particular friend/ and precious stones that caught and held the sun,/ and seashells singing the songs of the surf." The lilting prose and deft repetition make this a good choice for reading aloud. Cepeda (What a Truly Cool World) wisely plays up the text's silliness, not its visions of the pastoral. Working in a brilliant palette that would suit the contents of a gumball machine, he conjures up such scenarios as one brother hanging upside-down from a tree limb but holding his teacup right-side-up, and the sister, said to be hunting for treasure on the beach, sweeping the sand with a metal detector. Finally, the trio falls into the arms of their waiting parents (pictured only from their shoulders down), cheerfully reminding readers of the virtues of home sweet home. Ages 2-6.
Copyright 1999 Reed Business Information, Inc.

1. We Were Tired Of Living In A House

2. We Were Tired of Living in a House

3. We Were Tired of Living in a House

4. We Were Tired of Living in a House

5. We Were Tired of Living in a House

6. We Were Tired of Living in a House

7. We Were Tired of Living in a House Liesel Moak Skorpen and Joe Cepeda

8. We Were Tired of Living in a House Liesel Moak Skorpen and Joe Cepeda