Items related to Choosing up Sides 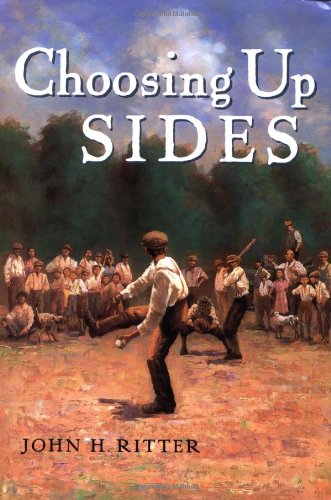 Left-handed preacher's son Luke Bledsoe has always felt like an outsider, until he discovers he can pitch a baseball faster than anyone else, but his father says that the left is the side of Satan and that baseball is the devil's work, leaving Luke to find a new strength in his life and in himself.

To Luke's father, baseball is "the devil's game" -- but to Luke, it's salvation.

Preacher's boy Luke Bledsoe is a left-hander in a right-handed world. Moved from town to town, he's spent his whole life feeling like an outsider. Until by chance he steps on a baseball field and discovers he can pitch. Really pitch. There's only one problem: his father. Reverend Bledsoe believes that the left side is the side of Satan and the baseball field is the Devil's playground. Luke has spent his whole life trying to please his father. Will he choose to give up the game he's come to love -- or turn his back on his family?

Baseball novelist John H. Ritter grew up playing "one-on-one" hardball with his brothers in the rural hills of eastern San Diego County along the Mexican border.

"I grew up in a baseball family," says John. "But we were also a family of musicians and mathematicians, house painters and poets. My dad was a sports writer in Ashtabula, Ohio, who moved the family out west, just before I was born, to become Sports Editor for The San Diego Union."

But when John was four, his mother died of breast cancer, and his father resettled the family in the rural, San Diego back country.

"One thing I remember about my mom is that she sang to us constantly, making up a song for each of her four children that fit our personalities perfectly. So from her, I got a sense of how to capture a person's spirit in a lyrical phrase."

"Out in that country," he says, "the neighbor kids lived so far away, my brothers and I developed a half-real, half-imaginary game where we pitched and hit the ball, then dreamed up the rest, keeping the score, game situations, and full, major league line-ups in our heads."

Those games proved to be good practice for dreaming up stories, too, such as Choosing Up Sides, John's award winning first novel.

Set in 1921 Southern Ohio, it's the dramatic and inspirational story of Luke Bledsoe, a left-handed preacher's boy who is forced by his family's religious beliefs to go through life right-handed. When Luke discovers he could be a tremendous baseball pitcher--but only with his forbidden left arm--the trouble begins.

"The story was inspired by events in my childhood, having grown up during the great Civil Rights era and being confused by the notion of prejudice. I also became aware of the bias left-handers sometimes faced, such as being forced to write with their right hands, and I was mystified by that as well."

However, as a left-handed pull hitter, he'd learned something else. "In the baseball world, the lefty was treasured--pitchers and hitters. So what I did in CHOOSING UP SIDES was to place Luke smack in the middle of these two opposing worlds and let the story unfold from there."

Bob Dylan, the songwriter, also inspired John to write songs all through high school. "Probably more of my mom's influence," he says, "but I liked how Dylan wrote about life from a working class perspective, often with religious overtones--a blend of gospel and blues."

After high school, John attended the University of California at San Diego, where he met his wife, Cheryl, now an elementary school teacher. Like their grown daughter, Jolie, who runs her own espresso cafe, John has always preferred the self-employed life, having been a custom painting contractor for 25 years. "Even so," he says, "I always 'booked' my calendar with time to write."

And in 1994, the Society of Children's Book Writers and Illustrators honored him with the Judy Blume Award for a novel in progress. Three years later, upon the sale of his first book, Choosing Up Sides, to Penguin Putnam, he retired from house painting and realized his dream of becoming a full-time writer.

"On top of all the enjoyment it brings me," he says, "I think baseball's a great metaphor for life. It's suspenseful, for one. You never know what's coming your way. And it's challenging. How do you hit a ball that dips and darts? How do you read a pitcher for clues when you want to steal a base?"

But John admits the grind of full-time writing is difficult. "No one ever encouraged me to become a writer. It just came naturally. Like being born with a good singing voice, I suppose. But the ten-hour days spent in solitude, the constant battle to get the words right, the story right, to meet deadlines--they all take their toll. Tougher than construction work, I'll tell you."

So why does he do it? "I love using that voice to say something I need to say. I love the rhythms and the musicality of language. I love discovering a good story, building it, and telling it. And when they all come together between the covers of a book, it's like magic.

Currently, John H. Ritter is the Writer in Residence for the Oceanside (CA) Unified School District, where he maintains a writing office at Stuart Mesa Elementary School and gives classroom presentations throughout the district.

His work has appeared in various national publications including Spitball: The Literary Baseball Magazine and The Christian Science Monitor.

Choosing Up Sides has received the following honors:

* Named a 1998 "Blue Ribbon Book" by The Bulletin of the Center for Children's Books.