Items related to Out of the Easy

Sepetys, Ruta Out of the Easy

Out of the Easy 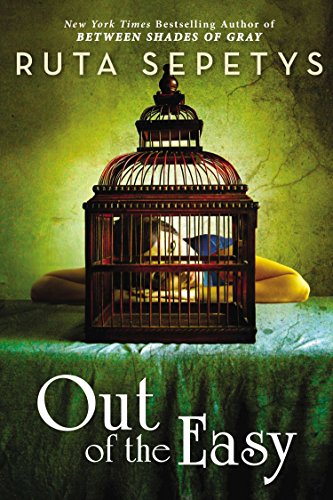 It's 1950 and the French Quarter of New Orleans simmers with secrets. Known among locals as the daughter of a brothel prostitute, Josie Moraine wants more out of life than the Big Easy has to offer. She devises a plan get out, but a mysterious death in the Quarter leaves Josie tangled in an investigation that will challenge her allegiance to her mother, her conscience, and Willie Woodley, the brusque madam on Conti Street.

Josie is caught between the dream of an elite college and a clandestine underworld. New Orleans lures her in her quest for truth, dangling temptation at every turn, and escalating to the ultimate test.
With characters as captivating as those in her internationally bestselling novel Between Shades of Gray, Ruta Sepetys skillfully creates a rich story of secrets, lies, and the haunting reminder that decisions can shape our destiny.

Amazon Best Books of the Month, February 2013: The French Quarter of New Orleans in the 1950’s calls from the pages of Out of the Easy, beckoning readers to enter a society of madams and debutantes, secrets and desires. “Sometimes we set off down a road thinkin’ we’re going one place and we end up another.” So it is for Josie Moraine, the daughter of a prostitute rooted in the underworld of the Quarter. Josie wants, more than anything, to trade in the dangerous hand of jokers and pimps her mother laid out, for one filled with books and a life away from the Big Easy. Populated by complex characters you come to love or loathe, but either way can’t stop thinking about (even months later), Sepetys beautifully delivers romance and menace in equal parts and what looks to be a predictable ending turns out to be anything but. --Seira Wilson

Ruta Sepetys (www.rutasepetys.com) is an internationally acclaimed, #1 New York Times bestselling author of historical fiction published in over sixty countries and forty languages. Sepetys is considered a "crossover" novelist, as her books are read by both teens and adults worldwide. Her novels Between Shades of Gray, Out of the Easy, and Salt to the Sea have won or been shortlisted for more than forty book prizes, and are included on more than sixty state award lists. Between Shades of Gray was adapted into the film Ashes in the Snow, and her other novels are currently in development for TV and film. Winner of the Carnegie Medal, Ruta is passionate about the power of history and literature to foster global awareness and connectivity. She has presented to NATO, to the European Parliament, in the United States Capitol, and at embassies worldwide. Ruta was born and raised in Michigan and now lives with her family in Nashville, Tennessee. Follow her on Twitter @RutaSepetys and Instagram @RutaSepetysAuthor.