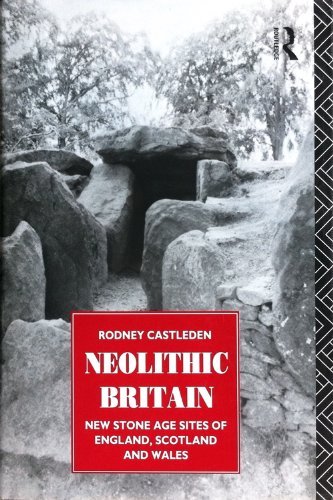 The phrase 'stone age' has come to mean different things to different people. To some it implies denigration, and a lack of culture, but archaeologists increasingly regard it as a period of achievement. The climax of the stone age in Britain, the neolithic period (4700-2000 BC), was a period of startlingly varied achievement, and it is this phase that Rodney Castleden documents in this book.
Britain is astonishingly rich in neolithic sites, which supply us with evidence of the complex archaic societies that flourished the length and breadth of the island. At its highest development, the neolithic economy depended on networks of communication that spread right across into mainland Europe. The neolithic Britons created some magnificent monumental architecture at their cult centres, such as Avebury and Maes Howe.
All too often the remains of that neolithic world have survived only in severely damaged fragments, sometimes hastily retrieved with the limited resources of a rescue dig: yet even these provide us with valuable insights. Where more sustained work has been possible, as at Fengate, Avebury, Crickley Hill or Stonehenge, we can begin to see a more continuous image of the neolithic way of life.
Rodney Castleden lists and surveys a wide variety of domestic, ceremonial and burial sites, some of them recently discovered. He selects some of these for detailed description and explanation; from these a sense of the diversity and vitality of the neolithic communities emerges.

Buy Used
Fine hardback (as new but for bookplate... Learn more about this copy

Book Description Routledge, 1992. Hardback. Fine hardback (as new but for bookplate of previous owner) in Near Fine dustwrapper (minimal edgewear). 432 pp 8vo black cloth in dustwrapper. Illustrated by the author. The picture on the listing page is of the actual book for sale. Seller Inventory # 46900

Shipping: US$ 12.18
From United Kingdom to U.S.A.
Destination, rates & speeds

Shipping: US$ 12.24
From United Kingdom to U.S.A.
Destination, rates & speeds

Shipping: US$ 12.24
From United Kingdom to U.S.A.
Destination, rates & speeds

Book Description Routledge 1992-03-13, 1992. Hardcover. Condition: Good. Item is in good condition. Some moderate creases and wear. This item may not come with CDs or additional parts including access codes for textbooks. Might be an ex-library copy and contain writing/highlighting. Seller Inventory # DS-0415058457-3

Book Description Routledge, 1992. Condition: Good. A+ Customer service! Satisfaction Guaranteed! Book is in Used-Good condition. Pages and cover are clean and intact. Used items may not include supplementary materials such as CDs or access codes. May show signs of minor shelf wear and contain limited notes and highlighting. Seller Inventory # 0415058457-2-4