Sexual Moralities in France, 1780-1980: New Ideas on the Family, Divorce and Homosexuality 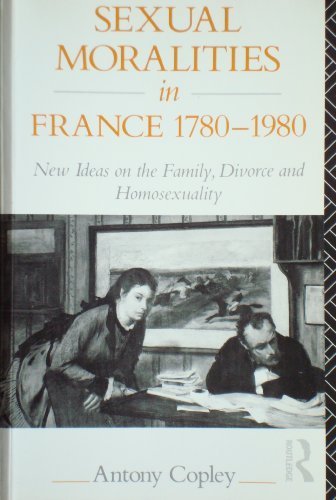 If the 1960s have already become the subject of history, the significance of the sexual revolution of that decade still requires explanation. This book seeks to explore the long-term origins of the libertarian revolt by tracing the development of sexual attitudes in France from the 18th century to the 1980s. The debates on divorce and homosexuality were key aspects of the discourse on sexual morality which led to a more libertarian approach. Antony Copley takes up the debate from the late 18th century, contextualizing the discourse in the more open decade of the Revolution, the repressive phase of 19th-century "Victorianism", the more liberal yet still dishonest years of the Third Republic, and the attempted breakthrough of 1968 and thereafter. He uses the experiences and attitudes of four "libertarian" moralists, de Sade, Fourier, Andre Gide, and Daniel Guerin, as commentary on this debate. This book should be of interest to undergraduates, postgraduates and academics of history and cultural studies.

Sexual Moralities in France, 1780-1980: New Ideas on the Family, Divorce and Homosexuality

Sexual Moralities in France 1780-1980: New Ideas on the Family, Divorce and Homosexuality

Book Description Condition: Good. This is an ex-library book and may have the usual library/used-book markings inside.This book has soft covers. In good all round condition. Please note the Image in this listing is a stock photo and may not match the covers of the actual item,500grams, ISBN:9780415077118. Seller Inventory # 8175773

Shipping: US$ 19.04
From United Kingdom to U.S.A.
Destination, rates & speeds