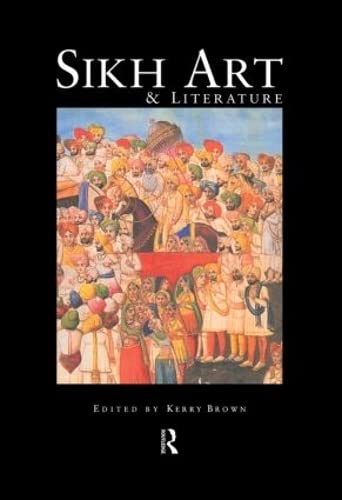 Sikh Art and Literature traverses the 500-year history of a religion that dawned with the modern age in a land that was a thoroughfare of invading armies, ideas and religions and arts of the East and West.
Essays by art curators, historians and collectors and religion and literary scholars are illustrated with some of the earliest and finest Sikh paintings. Sikh modernism and mysticism is explored in essays on the holy Guru Granth Sahib; the translations and writings of the British Raj convert, M.A. Macauliffe; the fathers of modern Punjabi literature, Bhai Vir Singh and Puran Singh; and the 20th century fiction writers Bhai Mohan Vaid Singh and Khushwant Singh. Excerpts from journals of visitors to the court of the diminutive and new translations of early twentieth century poetry add depth and originality to this beautiful and accessible introduction to the art, literature, beliefs and history of the Sikhs.
Illustrated throughout with 42 colour and 92 black and white images, Sikh Art and Literature is a colourful, heartfelt, and informative introduction to the Sikh culture.

Kerry Brown is the director of programs for the Sikh Foundation. She has been a writer and editor in religious publishing for fourteen years.
The Sikh Foundation was founded in 1967 to promote the heritage and future of Sikh faith and culture. Its sponsorships and collaborations include academic chairs, courses and conferences, international art exhibitions, books, films and videos.

When Britain partitioned its Indian Empire into Pakistan and India, it sowed the seeds of future strife, especially the division of the Punjab, the home of the Sikh faith, into Pakistani and Indian portions. Recurrent sectarian bloodshed has resulted. Sikh Art and Literature consists of ten scholarly essays published in connection with an upcoming exhibition of Sikh art at the Asian Art Museum in San Francisco and the Royal Ontario Museum. The essays provide a useful introduction to Sikh religion and culture. The writers, most of them Sikhs themselves, are well-regarded specialists in the arts and literature of the Indian subcontinent. Particularly interesting is one piece on the development of hagiographical art concerning the life of Nanak (1469-1539), the first Sikh Guru. The last six essays treat literature, with particular focus on the 20th century. While these essays are all informative, Westerners will most appreciate that on the life of Max Arthur Macauliffe (1841-1913), a senior British administrator in the Punjab who converted to Sikhism in the 1860s and greatly served the faith. Recommended for both academic and public libraries.AJames F. DeRoche, Alexandria, VA
Copyright 1999 Reed Business Information, Inc.

Book Description PAPERBACK. Condition: New. Book Cover and ISBN may be different from US edition but contents as same US Edition. Excellent Quality,Quick delivery, We may ship the books from Asian regions for inventory purpose. Our courier service is not available at PO BOX. Seller Inventory # nt_9780415202886

Book Description PAPERBACK. Condition: New. Book Cover and ISBN may be different from US edition but contents as same US Edition. Excellent Quality,Quick delivery by USPS/UPS/FEDEX/DHL/ARAMEX, We may ship the books from Asian regions for inventory purpose. Our courier service is not available at PO BOX. Seller Inventory # abe_jan_9780415202886

Shipping: US$ 10.41
From United Kingdom to U.S.A.
Destination, rates & speeds