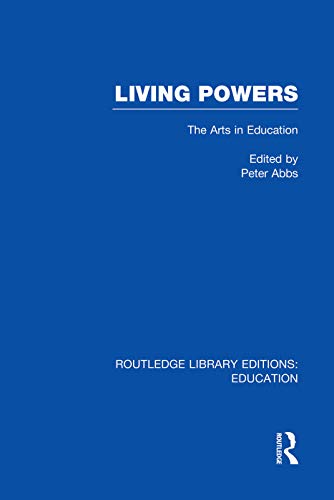 When originally published this was the first book to offer a collective history of all the arts – Art, Drama, Dance, Music, Literature and Film – in the curriculum. It also offers a coherent framework for the teaching of arts which is in line with the best current trends since the Gulbenkian Report of 1982. It insists that the arts, seen together should be an essential part of the national curriculum.

Peter Abbs was born and grew up on the North Norfolk coast in England. He has written and lectured widely on the nature of creativity and the poetics of culture. He is the Poetry Editor of Resurgence and editor of Earth Songs, the first Anglo-American anthology of contemporary ecoverse. He has published nine volumes of poetry including Icons of Time, Viva la Vida and The Flowering of Flint. Most recently in The Greater Journey (2008) he has worked with the photographer John Pack to explore the relationship between image and word. He is Research Professor of Creative Writing at the University of Sussex.

3. Living Powers: The Arts in Education