Items related to Spoiling for a Fight: Third-Party Politics in America

Spoiling for a Fight: Third-Party Politics in America 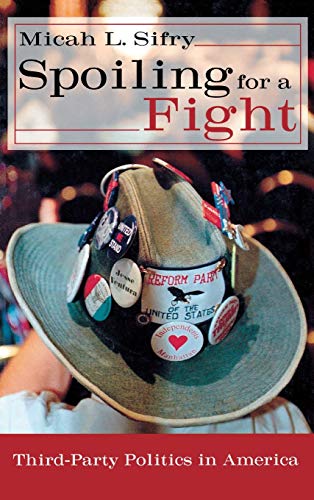 More Americans now identify as political independents than as either Democrats or Republicans. Tired of the two-party gridlock, the pandering, and the lack of vision, they've turned in increasing numbers to independent and third-party candidates. In 1998, for the first time in decades, a third-party candidate who was not a refugee from one of the two major parties, Jesse Ventura, won election to state-wide office, as the governor of Minnesota. In 2000, the public was riveted by the Reform Party's implosion over Patrick Buchanan's presidential candidacy and by Ralph Nader's Green Party run, which infuriated many Democrats but energized hundreds of thousands of disaffected voters in stadium-sized super-rallies.What are the prospects for new third-party efforts? Combining the close-in, personal reporting and learned analysis one can only get by covering this beat for years,  Micah L. Sifry's. Spoiling for a Fight exposes both the unfair obstacles and the viable opportunities facing today's leading independent parties. Third-party candidates continue be denied a fighting chance by discriminatory ballot access, unequal campaign financing, winner-take-all races, and derisive media coverage. Yet, after years of grassroots organizing, third parties are making major inroads. At the local level, efforts like Chicago's New Party and New York's Working Families Party have upset urban political machines while gaining positions on county councils and school boards. Third-party activists are true believers in democracy, and if America's closed two-party system is ever to be reformed, it will be thanks to their efforts

“At last, an engrossing book about Third Parties that is dynamic and portentous for the future of American Politics.” --Ralph Nader “Finally, the whole story of the rise of third-party politics. If you want the facts on the revolution that's just beginning, read this book.”-- Governor Jesse Ventura “Micah Sifry sees third party politics as the way to invigorate an American democracy crippled by big money and the lack of competition or accountability. He makes his case carefully and intelligently with a series of fascinating accounts of ongoing third party efforts. A must read for democracy reformers!” --Frances Fox Piven, co-author of Why Americans Still Don't Vote “Both sobering and empowering. Whether you like Ross Perot, Jesse Ventura and Ralph Nader or want to wring their necks, you've got to read this book.”--Arianna Huffington

“No one knows third-party politics like Micah Sifry. Spoiling for a Fight delves deeply into the real story of today's outside-the-box politics and the threat posed by third parties to the stuck-in-the-muck two-party system. The past, present and future of America's third-parties: it's all here.” --David Corn, Washington Editor, The Nation

Micah L. Sifry, formerly an editor at The Nation, is Senior Analyst at Public Campaign, a nonpartisan election finance reform group. He is co-editor of the The Gulf War Reader, and his work has appeared in the New York Times, The Nation, The American Prospect, The Progressive, Salon, Wired and Tikkun.

1. SPOILING FOR A FIGHT: THIRD-PART

2. Spoiling for a Fight: Third-Party Politics in America

3. Spoiling for a Fight

4. Spoiling for a Fight: Third-Party Politics in America

5. Spoiling for a Fight : Third-Party Politics in America

6. Spoiling for a Fight: Third-Party Politics in America