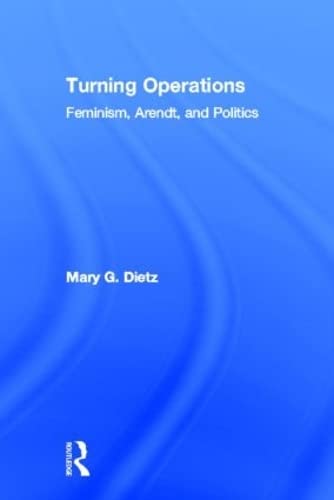 Through the re-interpretation of influential thinkers such as Arendt, Weil, Beauvoir and Habermas, Mary G. Dietz weds the concerns of demcratic thought with that of feminist political theory, demonstrating how important feminist theory has become to democratic thinking more generally. Bringing together fifteen years of commentary on critical debates, Turning Operations begins with problems central to feminism and ends with a series of reflections on the "the politics of politics," inviting the reader to think more expansively about the expressly public nature of political life.

"Political theory, for Mary Dietz, is an existential intervention that holds the promise of drawing us from spectating to acting. Her perceptive interventions or "turning operations" are performed upon a variety of problems and thinkers. Perhaps the most fascinating of these aims to open theories of political action constituted around pure speech (Arendt and Habermas) toward a better appreciation of strategy: "purposeful, methodical performance.."
-Stephen K. White, Editor of "Political Theory" and Professor of Politics, University of Virginia
""Turning Operations recaptures the spirit of feminist political thinking. Creatively employing the work of Hannah Arendt to turn feminist commonplaces on their head, Dietz both brilliantly exposes the limits of the identity debates that continue to dominate the American intellectual landscape and vividly depicts the centrality of political action for feminism in the new millennium.."
-Linda M. G. Zerilli, Professor of Political Science, Northwestern University
"This is political theory as it must be done these days, but rarely is. Complexly framed problematics-concerning action, speech, the public sphere, the nature of the political-are grounded in the political realities of our time and enriched through interpretations of classical and contemporary thinkers. Dietz's mind is capacious, lively, and inventive yet orderly and erudite, perfectly suited to holding together multiple and delicate strands of political thought.."
-Wendy Brown, University of California, Berkeley
"A very important collection by one of America's foremost contemporary political thinkers.For the past decade and a half, the work of Mary Dietz has comprisedmuch of the most important scholarship published in the areas of democratic and feminist political thought. A number of essays included here are classics. I already use a number of these essays in both graduate and undergraduate courses, particularly my courses in feminist political thought and contemporary democratic thought.."
-Catherine Holland, Associate Professor of Political Science and Women's Studies, University of Missouri
"Mary G. Dietz makes good on her promise to reassert politics, action, and the common world of political affairs back into political theory.."
-Perspectives on Politics, Fall 2003