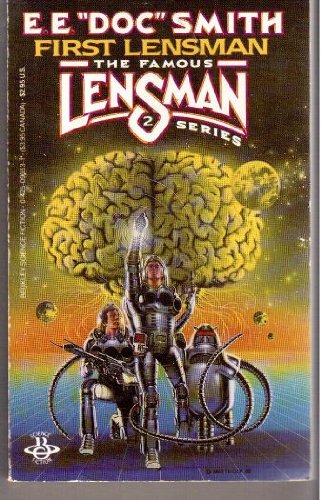 In the not too distance future, while fleets of commercial space ships travel between the planets of numerous solar systems, a traveler named Virgil Samms visits the planet Arisia. There he becomes the first wearer of the Lens, the almost-living symbol of the forces of law and order. As the first Lensman, Samms helps to form the Galactic Patrol, a battalion of Lensmen who are larger than life heroes. These solders are the best of the best, with incredible skills, stealth, and drive. They are dedicated and incorruptible fighters who are willing to die to protect the universe from the most horrific threat it has ever known. Edward Elmer Smith, also known as E.E. “Doc” Smith, was an early science fiction author who is sometimes referred to as the father of Space Opera. Smith’s novels are generally considered to be the classic space operas, and he is sometimes called the “first nova” of twentieth century science fiction. Smith expressed a preference for inventing fictional technologies that were not strictly impossible (so far as the science of the day was aware) but highly unlikely: “the more unlikely the better” was his phrase.

Book Description Berkley, 1986. Condition: Good. A+ Customer service! Satisfaction Guaranteed! Book is in Used-Good condition. Pages and cover are clean and intact. Used items may not include supplementary materials such as CDs or access codes. May show signs of minor shelf wear and contain limited notes and highlighting. Seller Inventory # 0425090531-2-4