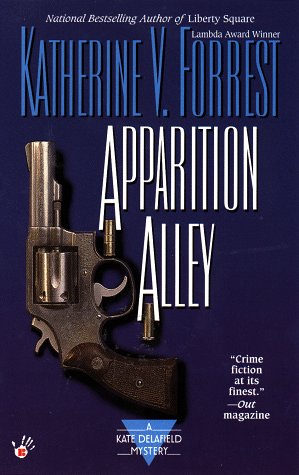 Lesbian LAPD homicide detective Kate Delafield is embroiled in a web of police misconduct and scandal when she is accidentally shot by a fellow officer and learns of a conspiracy to eliminate homosexual cops. Reprint.

LAPD homicide detective Kate Delafield is shot in a routine drug bust. It's her first line-of-fire accident, but when it turns out that the bullet that winged her came not from the suspect's gun but from a police weapon, the case takes on a different hue. Was Kate's injury the result of a bias against gays and lesbians in the department? And how does it tie into the charges levied against Luke Taggart, a cop whose partner, a closeted gay man, was killed in what he believes was a hate crime?

When Kate is reluctantly dragooned into defending Taggart at a departmental hearing on charges that could lead to a murder indictment, she tries to ignore the homophobia that seems to be the common link between her shooting and the murder of Taggart's partner. But the psychotherapy required after an officer-involved shooting forces her to confront her guilt over the suicide of another member of the department and her ambivalence about outing her gay colleagues or even coming out of the closet herself.

Forrest uses both the current tarnish on the reputation of the Rampart-era LAPD and the tangled personal and political implications of sexual diversity to good advantage in this well-crafted mystery, the fifth in the Kate Delafield series. The most effective scenes, in the office of the psychologist she's forced to see, add another layer of complexity to Kate's character. This is a heroine who continues to evolve and grow with every new adventure. --Jane Adams

Katherine V. Forrest is one of the best-known lesbian writers in the world. Author of 13 works of fiction, all of which have been published abroad, she is twice winner of the Lambda Literary Award for best mystery, and has been honored with the Pioneer Award from the Lambda Literary Foundation. She has been profiled in virtually every major lesbian and gay publication in America, as well as in numerous magazines and newspapers internationally. Senior fiction editor at Naiad Press from 1984 to 1994, she now teaches classes and seminars on the craft of writing. She lives with her partner, Jo Hercus, and a tabby cat named Stevie, in San Francisco.