Oxford Guide to People and Places of the Bible

Oxford Guide to People and Places of the Bible 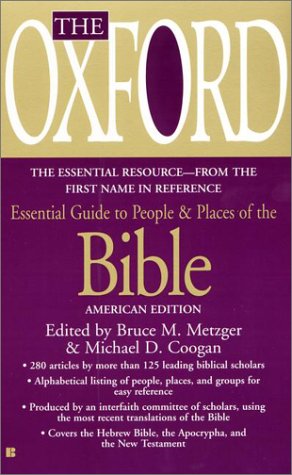 Featuring some 280 articles by 125 leading biblical scholars, this reference source to the Bible's key players and locales encompasses information on both individuals and groups in ancient Israel and early Christian communities, along with a history of major geographical locales, helpful cross-references, and more. Original.

In the late 20th century, increasing numbers of preachers and scholars have emphasized the narrative quality of the Bible, considering Scripture to be a collection of stories about God's relationship with humanity. Narrative readings of the Bible are most trustworthy when they're based on clear understandings of the characters and settings. And such understanding is now within reach of any lay reader, in the form of the well-researched, easy-to-use reference The Oxford Guide to People and Places of the Bible. Edited by Bruce M. Metzger (the renowned New Testament scholar who chaired the committee that produced the New Revised Standard Version) and Michael D. Coogan (editor of The Oxford History of the Biblical World), this book contains more than 300 entries on every major person and place in the Bible, from Adam to Zedekiah (the last king of Judah) to the Garden of Eden to Golgotha. Contributors from a range of theological traditions and academic disciplines ensure each entry is informed by the latest archaeological findings, as well as current sociological, literary critical, and linguistic research. Extensive cross-referencing will lead readers from one discovery to the next, fleshing out each Bible story as they go. Even in entries for the most familiar characters, readers will find entertaining surprises: Goliath, for example, is said to be almost 10 feet tall in I Samuel; but if you believe the Dead Sea Scrolls, he was really stood closer to 7 feet. --Michael Joseph Gross

Bruce M. Metzger is Collard Professor Emeritus of New Testament Language and Literature at Princeton Theological Seminary. Michael D. Coogan is Professor of Religious Studies at Stonehill College in Easton, Massachusetts and Director of Publications, Harvard Semitic Museum. He is the editor of The Oxford History of the Biblical World and The New Oxford Annotated Bible (3d Edition).

1. Oxford Guide to People and Places of the Bible

2. Oxford Guide to People and Places of the Bible