Items related to The Mask of Ra

The Mask of Ra 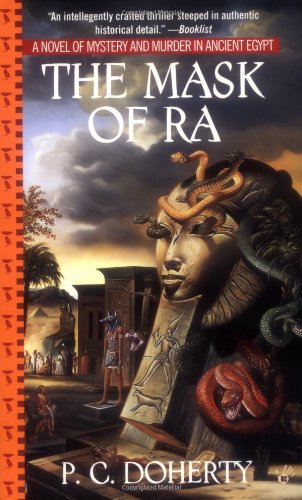 The first in a new mystery series set in ancient Egypt, this unique tale of murder and greed pits a group of assassins planning to pollute the unfinished tomb of Pharaoh Tuhmosis II against an evil they cannot even imagine, while the pharaoh's widow Hatusu and the Chief Judge search for a killer. Reprint.

P.C. Doherty was born in England. He studied history at Liverpool and Oxford Universities, obtaining a doctorate at Oxford for his thesis on Edward II and Queen Isabella. He is now headmaster of a school in Northeast London and is the author of several acclaimed mystery series, including The Sorrowful Mysteries of Brother Athelstan, the Hugh Corbett medieval mysteries, and The Canterbury Tales of Mystery and Murder. Following The Mask of Ra, his ancient Egyptian mysteries include The Horus Killings and The Anubis Slayings.

Author of many novels set in the England of past centuries, Doherty (Ghostly Murders, 1998, etc.) here presents the first of a series about Ancient Egypt. A war with enemies along the Nile Delta has just ended, and a triumphant Pharaoh Tuthmosis is returning to Thebes after stopping at Sakkara, site of the Pyramids. He has barely stepped from ship to his palaquin and the welcome of wife Hatusu when he keels over and dies, seemingly from the bite of a viper. Captain Meneloto, head of the Pharaoh's Guard, is put on trial for negligence at the court of Amerotke, chief judge of Thebes, who temporarily reserves judgment. Another problem, reported by Chief of Police Asural, is the persistent theft of small precious objects (not unlike the things sold by Amerotke's devoted servant, the dwarf Shufoy) from tombs that are sealed. The Chief Judge, though, sees a far greater problem: as reports of enemy armies approaching the city become rampant, the circle surrounding Queen Hatusu has divided into enemy camps, with councillors Seth and Semenmet at odds with Vizier Rahimerecontroller of palaces and temples. Soon the enemy must be faced, and so Queen Hatusu leads the royal regiments into battle while Amerotke, after falling into a near-fatal trap, eventually deciphers the means, the motive, and the hand behind the death of the Pharaoh. Chaotic plotting; an oversupply of busy, forgettable characters; enough detail of clothing, buildings, tombs, interior design and everyday life to fill a small textbook. Surely, life in medieval England was more fun than this. -- Copyright ©1999, Kirkus Associates, LP. All rights reserved.